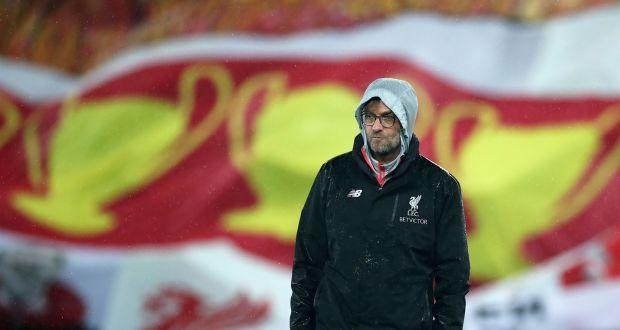 Suddenly splinter groups of thoughts ganged up to form an opinion that, after all, Jurgen Klopp might not be the man.

Maybe he isn’t, but it is probably a good idea to give him time to find out if this is the case. Perhaps that’s why last summer Liverpool gave him a contract extension to 2022. They didn’t mean 22 minutes past eight.

But as Klopp says, the circus is in town. It feels like it’s always in town. The noise is distracting, loud and tiresome. It means that Wolves feels more than a week ago.

There has been Chelsea at home since, now preparations for a visit to Hull. On and on, the games coming as fast as opinions. Almost.

It can be hard for the neutral to step back, never mind someone in the thick of it like Klopp. He tries: when he had a minor confrontation with a supporter during the Chelsea match on Tuesday night, Klopp’s message was to remain steadfast. “Cool” is his preferred term.

There are moments when Klopp’s behaviour stands this notion on its head, but it is meant as an overall approach, a strategy. Signing Liverpool’s most creative and coveted player, Philippe Coutinho, until 2022, as well is part of this. It is long-term, the “project” Klopp mentions.

This is admirable vision in a short-termist, immature society such as professional football.

Klopp joined Liverpool 16 months ago. Our sense is that the club is developing, on and off the field, and Klopp’s personality and achievements at Borussia Dortmund are central to that. He has entertained as a man; more importantly, he has proven himself as a manager.

But three defeats in a week dents anyone. This damages belief in the idea of steady progress.

One immediate answer to that question post-Wolves about Liverpool’s direction was their next competitive match – the reserves’ trip to Sunderland less than 24 hours later. It was most definitely cool in the Co Durham village of Hetton-le-Hole where Sunderland stage these Premier League under-23 fixtures.

There were 52,000 to watch the Wolves Cup-tie, there were 300 to watch the under-23s. It was 0-0, there was some good football and Dubliner Conor Masterson – just 18 – was mature and composed in defence. His boyhood club Lucan United should derive great satisfaction at Masterson’s development.

But overall Sunderland were better and it brought back a query about Liverpool’s strength in depth. During December, and before, Klopp would name inexperienced youngsters such as 17-year-old Ben Woodburn on the bench. Chelsea had Pedro on theirs the other night.

It is fine and understandable that Klopp salutes and embraces youth, but there is also the solidity and nous which comes with experience. Liverpool lack Chelsea’s depth of been-there knowledge. Pragmatism is a virtue they might need in their remaining 15 games.

Being in Hetton-le-Hole should always matter to Liverpool, as this is where Bob Paisley was born and bred. Paisley, the subject of a forthcoming biography by Ian Herbert called – appropriately – Quiet Genius – was not short of pragmatism.

Paisley’s trophy-haul was trawler-sized, but that is the big picture, the project. Week to week it was different, small wins, two points, on we go. If sometimes people were unimpressed, Paisley pointed to the league table.

As David Fairclough has said: “We can all look back through rose-tinted glasses at the Liverpool team of the late ’70s and early ’80s. But let’s be honest, it wasn’t always perfect . . . sometimes they’d just manage to scrape through . . . occasionally they’d lose, but no big fuss was ever made within the club.”

Fans were just as fanatical then about football but Paisley was allowed (more) time and space to work and breathe. Klopp needs the club of today to be similarly sensible. It seems they are. He also needs them to be as ambitious as rivals in the summer market.

Retaining balance cannot always be easy with the circus permanently in town. And Bob Paisley did not have the weight of a 27-year-wait for the title looming constantly in the background.

But Liverpool are not alone in this – for Tottenham the wait is 56 years and for Arsenal it has grown to 13 years. There is yearning beyond Liverpool 4.

A dull if necessary 1-0 victory at Hull City is the sort of result that would remove some unhelpful angst from the situation. Bob Paisley would take it, then he might remind people that Liverpool finished eighth last season.

Byrne’s move to Wigan is the right one

“Being too cool too early is always a mistake.” Klopp said that in reference to young players and the temptations of bling.

Which brings us to Jack Byrne. In different circumstances it would be odd to take encouragement from Byrne’s midweek move from Manchester City to Wigan Athletic, but Byrne’s transfer produced hope, not disappointment.

Byrne (20) joined City aged 15. He moved from Dublin to Manchester full of the optimism such exposure brings. He did not lack confidence.

But he leaves City without having played for the first team. There has been a fruitful loan spell in Holland and a less fruitful one in Blackburn. Now Byrne is at a club who could be in League One next season.

Yet the change in status is to be welcomed as it means Byrne will play competitive men’s football. Wigan’s not cool – probably. It’s no bad thing.

A fortnight ago here, Daryl Murphy’s name was prominent due to what he had come to symbolise at Newcastle United under Rafa Benítez – a change in transfer policy. Murphy (33) was not bought with sell-on value in mind.

At least three weeks ago, Newcastle owner Mike Ashley, a man Benítez speaks to via an intermediary – managing director Lee Charnley – voiced his opinion on this policy change. It seems he was/is not all for it.

Since then Benítez has tried to sign Andros Townsend from Crystal Palace, and failed.

Benítez isn’t happy; Ashley is in control. Don’t bet on Benítez being at Newcastle beyond May. But don’t blame Murphy.