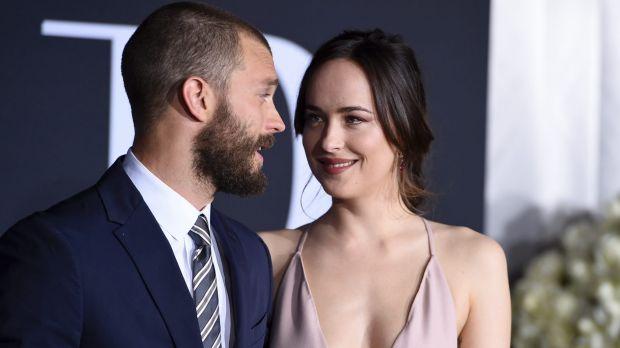 The Northern Irish actor and co-star Dakota Johnson reprise their sadomasochist relationship as Christian Grey and Anastasia Steele in the follow up to the 2015 hit, which made $US571 million worldwide.

“We pull out all the stops,” Dornan said at the world premiere of Fifty Shades Darker in Los Angeles on Thursday.

“If you’re making a sequel to anything, I think there has to be some kind of advancement on the first, you have to go a bit bigger in a lot of areas, and I don’t think this film is any different.”

Fifty Shades Darker, based on the second book in the trilogy of novels by E.L. James, begins its global roll out from February 8.

In promotional interviews for the latest instalment, Dornan describes the movie and its move towards pyschological thriller as “it’s huge and it’s heavy”.

It will star new characters, including Australia’s Bella Heathcote as Grey’s shunned lover Leila, who will bring the “darkness” to the pair’s love story.

“I love that thriller aspect and the element of danger gets darker and darker,” says the 29-year-old Melburnian actress, whose career began on Neighbours and led to her first big movie break on Tim Burton’s Darker Shadows.

“In Darker we have so much more happening, we’ve got these new characters and we see them develop,” says James. “We have lots of fans who can’t wait to see what Christian and Ana get up to next and we actually deliver.”

Foley, who moved away from movies into television (Netflix’s House of Cards), initially raised eyebrows as a choice to helm the remaining movies in the Fifty Shades trilogy, but it all formed part of James’ desire to move away from simply being a sensual love story.

“Even if you haven’t seen the first movie, it’s still very satisfying,” Foley says of his latest work.

“The first film was like an awakening, this film becomes more intricate, more suspenseful,” says star, Johnson. “Ultimately it’s an epic love story. One of them has very dark desires and another has to find that within herself because they love each other so deeply.”