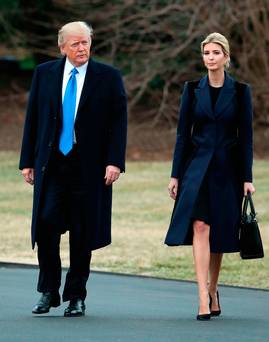 Ivanka Trump and Jared Kushner successfully persuaded Donald Trump to scrap executive orders that would overturn LGBT rights – but the couple’s calming influence on the president is starting to wane, it has been reported.

A “brewing power struggle” has emerged between Kushner, the son-in-law who can keep the president “on message”, and Steve Bannon, the ultra-conservative former businessman described as the power “behind the throne”.

A draft executive order on LGBT rights, aimed at rolling back Barack Obama’s progressive reforms, was circulated last week. It outlined a weakening of protections designed to shield LGBT individuals from discrimination.

Trump’s daughter and her husband, who are both keen supporters of gay rights, persuaded the president to shelve the order, sources said.

Instead, the White House released a statement reassuring people in the LGBT community that their rights would be protected.

“President Donald J Trump is determined to protect the rights of all Americans, including the LGBTQ community. President Trump continues to be respectful and supportive of LGBTQ rights, just as he was throughout the election,” it said.

It was unclear whether the president was seriously considering signing the draft executive order into law, but the reports of Ms Trump and her husband’s intervention could have wider implications.

“There are some in Trump’s family that have some views on these things,” the source told the Politico website. “That’s where the decision is ultimately being made.”

Such a stance would pit Ms Trump and Kushner against several key ultra-conservative White House figures, including vice-president Mike Pence – who is firmly against expanding LGBT rights and has a strong distaste for marriage equality – as well as Bannon and key aide Stephen Miller.

Kushner, a former property developer, drafted Trump’s speeches on the campaign trail and was said to have been the voice Trump listened to above all others.

He apparently arranged several meetings for Trump before November’s election, including one with media magnate Rupert Murdoch.

Kushner was “f***ing furious” that a meeting he had apparently brokered between Trump and the Mexican president Enrique Pena Nieto was cancelled, a source told Vanity Fair last week.

President Trump had tweeted that if Mexico was “unwilling to pay for the badly needed wall, then it would be better to cancel the upcoming meeting”. The Mexican president cancelled the meeting.

“I’d never once heard him say he [Kushner] was angry throughout the entire campaign. But he was furious,” the source said.

There are also suggestions that Ms Trump and her husband’s orthodox Jewish faith is being exploited within the White House.

It was “no coincidence” that the anti-Muslim “travel ban” was announced on a Friday evening – after Kushner had left work and was observing Shabbat, sources told the New York Daily News.

“Everyone is working 24/7, but Jared, because of his religious views, not only can’t be in the White House, but can’t be on his phone, can’t drive his car, can’t listen to the radio – he can’t be reached,” the source said.

The day after the immigration order was announced, Ms Trump posted a glamorous photograph of the couple preparing to go out, while protests raged at airports across America.

She was apparently unaware of the announcement and the furore it sparked, and was reportedly shocked by the backlash against her for posting the photograph, which has been described as her “Marie Antoinette moment”.

The “power struggle” within the White House centres on Bannon, who is thought to have been the architect of the scheme to ban travel from seven Muslim countries.

Aides to the former Breitbart News Network editor have labelled Kushner “green” and “soft” and worry he is attempting to make the president more moderate, the NY Daily News reported.

Kushner apparently reassured business leaders before the election that Trump would be “rational” on immigration were he to become president.