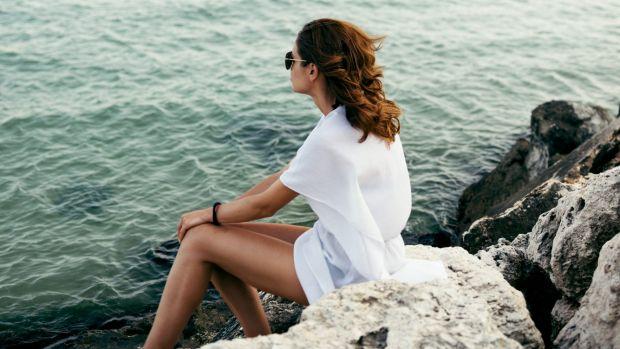 I went to see a psychologist about two years before I first separated from my husband, ostensibly about work stress, but in the final minutes of the hour-long session I said, “Oh, and I also want you to help me pluck up the courage to end my marriage.”

I flip-flopped 100 times a day between wanting to break up and not wanting to break up, and often it had nothing to do with anything Adrian was saying or doing at the time. It was the push and pull of my head and my heart – or, more accurately, my wisdom and my fear.

No matter how right you know a breakup is for you, you can still end up feeling let down by your ex, abandoned and alone. It comes back to feeling disappointed in them for not being the person we wanted them to be, which in turn comes back to our ignoring reality in favour of fantasies.

The greatest benefit of not being in a relationship is the amount of time and energy we can invest in ourselves. Every moment we spend cursing an ex for leaving us alone is a moment wasted on old rubbish.

Let’s embrace aloneness, people! Let’s see it for what it is: an opportunity to practise some mad Buddhist skills. As a consequence of a breakup, we have a chance to influence our own arising.

Those of us with children know that getting divorced is one of the biggest and most influential events of their lives. We can encourage positive arising in our kids during this time by showing them how to embrace impermanence, reality and aloneness.

I’m not pretending it’s easy. My son has lately been telling me he’s “too little to have parents living in different houses”. It’s devastating to hear him say that, and to see the fat tears run down his face, but I have to deal with what really is. I have to keep reinforcing the fact that he is very loved by both his parents but we need our own space to stay happy and peaceful (and not fight).

Whether or not we have kids, by separating with confidence and grace we can be a beacon to others. Adrian’s parents are an excellent example. They divorced bitterly when he was a teenager, but in the years that followed built a real friendship so as to both be able to attend family events without tension.

Even in a normal relationship, we come to depend on the other person in certain ways. In most relationships there’s a kind of informal division of daily labour. It might be “I work longer hours, so you cook dinner”, or “You clean the kitchen, so I put the bins out”.

Couples have such agreements about a million things that don’t even seem logical when they’re spoken out loud, but we come to rely heavily on them. Maybe one person always cleans the shower, while the other always drops Nanna home after Christmas lunch. One organises the direct debits, and the other cleans up the backyard dog poo. One stacks the dishwasher and the other gets up for the kids at night.

Hopefully it all evens out and both parties are at least peripherally aware that the other is taking care of stuff, but I can tell you from experience that suddenly shifting to running the house alone can be quite a shock.

About a month or so into our first separation, as the grass grew long and brown and stank to high heaven of dog poo, I started to wonder how – and in fact if – I would be able to keep myself and the kids alive without Adrian’s supervision and help. It was very overwhelming at times.

The feeling I was calling aloneness when I was still married was actually loneliness and low self-esteem. I was feeling useless and stupid at not having been able to keep my marriage together. What I should have done was work on my self-image, and take advantage of the solitude with some introspection.

Low self-esteem relies on selfcriticism. There’s plenty of criticism flying around before, during and after a breakup, so it’s no wonder it can infiltrate our inner monologue, too.

Rather than let it scare you away from introspection, let it be the reason to embrace it. Aloneness will help you hear the negative self-talk that’s bringing you down, and when you hear it you’ll know it’s over the top. Only then can you work on reminding yourself of your strengths.

I didn’t follow my own advice when I was suffering from low self-esteem.

What I did was renege on the separation and practically beg Adrian to move back in. Things were different the next time around, though. I was better prepared for the reality of being alone, my kids were older and less dependent, and I was more centred and confident.

I focused on the fact that running the house alone is different but no harder than running a house with someone I can’t live with peacefully. Being alone is certainly more peaceful!

I’m at the stage now where I consciously enjoy doing alone all the things that used to be fraught with controversy and tension when I tried to do them with Adrian.

Just choosing something to watch on TV after a long day was a painful experience that almost always ended up unsatisfactorily. Now, as I lie alone in my big bed and watch whatever the hell I please, I can’t help but sigh with relief. I’m relieved when I buy new things, and when I let our pet chook inside on hot days, because there are no arguments any more. Being alone is so wonderful!

But aloneness is not just about getting our own way: it gives us an opportunity to think. Thinking about our lives without distractions is the only way we can evolve thoughtfully into the person we want to be.

If we spend our lives avoiding being alone with ourselves, just reacting to the world, grasping for short-term coping mechanisms and relying on others to tell us who we are, we’ll end up pretty crudely carved by life.

You can sometimes see it in people’s faces, can’t you? I can see in the faces of friends who’ve spent their lives using drugs or alcohol to avoid themselves: the random etchings of a life of emotional chaos. It sends shudders down my spine just thinking about it. It’s so sad.

What is it that these people are afraid of? What do they think will happen if they’re alone with themselves? Are they really afraid of what might happen?

I remember worrying myself sick about what might happen if my attack progressed, which ensured that it did. Eventually I realised that what always happened was it blew itself out. I didn’t end up screaming or writhing around on the floor in public, as I feared: I just ended up tired. When I understood that, I stopped having anxiety attacks.

You need to figure out exactly what it is about being alone that scares you. Do you think you’ll cry? Well, that’s fine. Someone said to me once: “I’m scared that if I start crying I’ll never stop.” Of course she’d have stopped, but it seemed like a pretty sincere expression of fear.

Are you afraid of feeling sad? Do you worry about just how sad you might actually be? Maybe you’ll discover that you’re really, really sad. Actually facing it isn’t going to make it worse.

What if you sat alone with yourself, discovered that you were really, properly sad, then cried for ages? Then what would happen? The answer is nothing, except possibly a feeling of relief at having released your feelings.

If you sat alone again tomorrow, you might be sad and cry then too, but it wouldn’t be as bad. And the day after tomorrow, it would be better still.

We humans are incredibly resilient. We are built to overcome and keep moving, and tears and sadness are part of that mechanism. Let your mind and body do what they need to do to repair.

Buddhism requires self-reflection. It doesn’t work without it. You can read all the books, buy all the statues and share all the motivational memes you want, but if you’re not prepared to sit alone with yourself, you’re not really doing it.

As you progress, it’ll become easier and more natural, but in the beginning it takes a lot of discipline, and ideally it will involve meditation. If you really can’t do it yet – spend time with yourself either meditating or just thinking about life, love and the universe – then reading Buddhist books is a great way to train your mind for reflection.

No doubt you’ll read bits that stop you in your tracks and have you blinking at the ceiling in bed later. If you find that all your worries seem to come and sit on your chest at night time, preventing you from sleeping, create a specific time and place in your day for meditation or quiet reflection so you can deal with all of that before you go to bed. You can use the same technique with crying: allow yourself a specific time and place for a good cry, and you will find this will stop it happening when you don’t want it to.

Aloneness is crucial in breakup recovery in particular, because you have so much to think about and grow from. There’s an old joke about the point of marriage: “Of course you need a wife, otherwise who would ever tell you all the things that are wrong with you?”

There’s a ring of truth to that, actually. I’m not suggesting every accusation that’s hurled at you during a breakup is insightful, but I’m sure you noticed some issues in your ex when you got to know them well, so it’s likely they may have noticed a few of yours.

By exploring which of these nuggets of insight might have truth in them, you can also free yourself of the insults that weren’t true. Of course, it takes skill to sort out the petty stuff from the constructive criticism, and by all means reach out to friends and professionals for guidance, but don’t do that instead of introspection. It can’t be out-sourced.

Aloneness will give you the opportunity to drill down into your disturbing emotions, your attachments and your self-destructive behaviours.

It’s like a puzzle that will come together before your eyes, with surprising results. You’ll find you’re holding on to all sorts of things from as far back as early childhood that are affecting your emotional reflexes today. By naming them and filing them properly in the past, you don’t have to keep living them over and over again. You can look forward to better relationships as a consequence of this alone time.