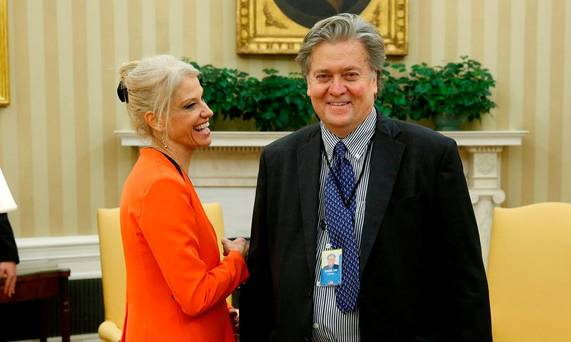 Rex Tillerson, who ran Exxon Mobil for a decade before signing on as Donald Trump’s secretary of state, is reportedly “baffled” that the White House didn’t consult him on its controversial executive order restricting travel and immigration from seven mostly Muslim countries.

James Mattis, who retired as a four-star Marine Corps general and supervisor of the US Central Command before becoming Mr Trump’s secretary of defence, is said by the Associated Press to be “particularly incensed” about exactly the same thing.

Both men – seasoned, thoughtful managers with bucketloads of experience and insight – probably thought Mr Trump recruited them to his cabinet to be trusted advisers. They may be in for more surprises, however, because there’s a good chance that Mr Trump sees them merely as hood ornaments atop the little engine of state he’s building at 1600 Pennsylvania Avenue.

For most of Mr Trump’s career, he has trusted only a small group of long-time loyalists at the Trump Organisation, and even then he has often tightened the circle further to family members. Advisers will come and go in the White House in coming years, but it’s likely the only permanent confidantes and counsellors to the most powerful man in the world will be his son-in-law, Jared Kushner (36), and his daughter, Ivanka (35).

It will probably be ‘Javanka’ to whom Mr Trump turns for final gut checks on major decisions, and the Tillersons and Mattises of the world may have to shuffle along.

That’s not to say outside advisers won’t ascend from time to time. Remember Chris Christie and Rudy Giuliani? Both hovered in Mr Trump’s inner sanctum during the 2016 campaign before he passed them over for White House and cabinet posts. For a time, they appeared to be close counsellors before being put out to pasture once Mr Trump deemed them liabilities.

Mr Trump hasn’t enjoyed sharing credit or centre stage for long stretches with anyone other than family. Advisers like Mr Christie and Mr Giuliani (and Cory Lewandowski) who are considered overly ubiquitous or assertive – or both – can find themselves out on the street. That’s a reality that may eventually land hard on Mr Trump’s current leading media ambassador, Kellyanne Conway, who seems to have enjoyed more airtime lately than her boss. Chief strategist Steve Bannon, on the other hand, has shrewdly managed to stay off TV and has avoided interviews (a posture Mr Kushner also favours).

But Mr Bannon (63) had a coming-out of sorts over the last few days after it was revealed he worked in secrecy with a White House youngster, 32-year-old Stephen Miller, to draft Mr Trump’s immigration order. Widespread outcry about the order and Mr Bannon’s apparent power to dictate policy – along with his promotion to an influential position on Mr Trump’s National Security Council – inspired a spate of recent headlines describing where gravity now resides in the Oval Office: with “President Bannon”.

This creates some peril for him. Mr Trump has always enjoyed having street-smart brawlers like Mr Bannon at his side (think of Roy Cohn and Roger Stone) but he’s unlikely to countenance a pretender to the throne. (Even if Mr Bannon is going out of his way not to pretend, the media has crowned him. Mr Trump absorbs media coverage and it often sways him).

Mr Bannon and Mr Conway may survive for as long as Mr Trump does. But there are already rifts within Mr Trump’s senior team as different cliques jockey for position.

Mr Trump’s inability to knit together advisers and managers, and his family-centric ways, will continue to be stumbling blocks for his administration.

Mr Trump’s management experience has been confined to the boutique licensing and development business he and his children run from the 26th floor of Trump Tower. The only sizable enterprise he ever oversaw was his casino company, where success depended on sharing power with qualified managers, being emotionally and intellectually disciplined and thinking strategically. Mr Trump did none of those things and ran that venture into the ground.

The practical implications of this for Mr Trump’s presidency have surfaced just 12 days into his tenure, with the word “chaos” a common term in many accounts of his immigration ban, confrontation with the Justice Department, random tweeting about replacing Obamacare, fights with US intelligence services and federal agencies that are investigating him and allegations of voter fraud.

“We’ve seen some problems,” Senator Rob Portman, an Ohio Republican, told CNN diplomatically. Mr Trump, who famously quipped during the presidential campaign that he “knows more about Isil than the generals do”, on Sunday launched his first covert military strike against terrorists in Yemen – an operation that apparently reflected the president’s desire to accelerate the use of such actions.

A Navy Seal and an eight-year-old girl were killed and a US aircraft crashed and had to be destroyed. Mr Trump approved the strike at a recent White House dinner, according to the ‘New York Times’, and his guests included Mr Bannon, Mr Kushner, Mr Mattis, Vice-President Mike Pence, National Security Adviser Michael Flynn, and the chairman of the Joint Chiefs of Staff, Gen Joseph Dunford. Some critics suggested the attack was too hastily arranged and proceeded, as Reuters put it, “without sufficient intelligence, ground support, or adequate back-up preparations.”

Press secretary Sean Spicer described the mission as a success, citing the number of terrorist casualties (about 14) and valuable intelligence US forces secured.

Mr Trump campaigned in part on the notion that he would bring managerial prowess to the White House. But his entire business career, his presidential campaign, and now his presidency, have been routinely marked by chaos and seat-of-the-pants decision-making.

Some observers attribute this – as well as Mr Trump’s haphazard tweeting and his fondness for confrontational or unsettling statements – to various forms of the Trumpian dark arts and wily, strategic thinking. It’s none of that. It’s just Mr Trump being Mr Trump, and the country he’s presiding over should brace itself accordingly.