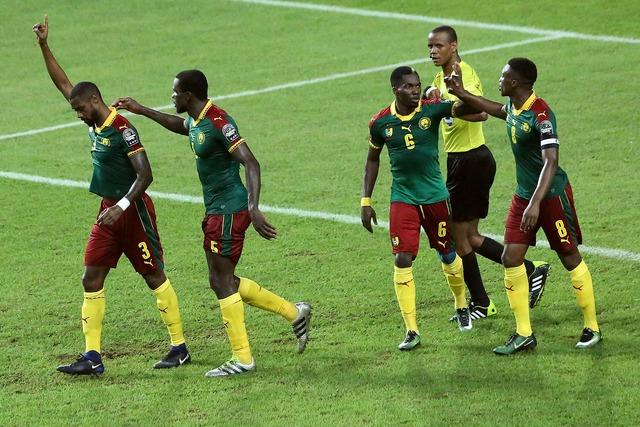 Substitute Vincent Aboubakar struck a dramatic late winner as Cameroon defied the odds to sink hot favourites Egypt and claim their fifth Africa Cup of Nations triumph with a 2-1 win in Libreville.

The result ends the Indomitable Lions‘ 15-year wait to get their hands on the trophy for the fifth time, making them the second most successful nation in the tournament’s history behind seven-time winners Egypt.

Mohamed Elneny had put Egypt in front midway through the first half but a stirring second-half performance from Cameroon saw Nicolas Nkoulou equalise before Aboubakar fired home with a sublime piece of skill in the 88th minute.

Victory was all the more remarkable for the Indomitable Lions and their unheralded coach Hugo Broos having entered the tournament with few expectations and eight key players – including Liverpool defender Joel Matip – refusing to join the squad.

But growing belief and a magnificent display of teamwork helped Broos’ men defy the odds and prove worthy victors in what was their first win in the tournament since 2002.

Egypt, entering the final with a formidable record of only conceding one goal in the finals so far, had the better of the early stages, with Abdallah El Said forcing a save out of Cameroon goalkeeper Fabrice Ondoa from a long-range effort in the second minute.

Sebastien Siani and Christian Bassogog had chances for Cameroon but the Egyptian defence continued to show the form that made them clear favourites to claim a record seven crowns.

And it was little surprise when the favourites went ahead in the 22nd minute, Arsenal midfielder Elneny firing high into the net from a tight angle after a superb through-ball from Mohamed Salah.

Cameroon responded well, Bassogog hitting a shot high and wide after Egypt keeper Essam El Hadary flapped a cross into his path, before Ondoa smothered a chance for Salah on the stroke of half-time.

Cameroon maintained their momentum at the start of the second half with Bassogog at the centre of most of their moves before Nkoulou powered home their deserved equaliser just before the hour-mark.

The Lyon midfielder rose above the Egypt defence to meet a deep Benjamin Moukandjo cross from the left and head past a helpless El Hadary.

Egypt looked tired and short of ideas as Cameroon continued to press forward, Nkoulou heading just over the bar from Michael Ngadeu’s corner, then Jacques Zoua flashing just wide on the counter-attack.

And the winner came in dramatic fashion two minutes from time when Aboubakar chested down a long ball on the edge of the box and flicked it over defender Ali Bakr before rifling home past El Hadary.