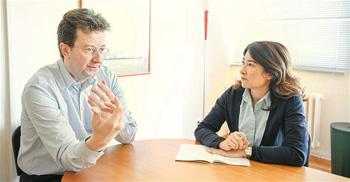 Turkey’s Central Bank has been oscillating between addressing the country inflation and trying to spur growth but will ultimately have to choose one unless it undertakes major reforms, according to a lecturer at Koç University.
“They are stuck between low growth and high inflation,” said Murat Üçer. “If you want to fix both, you need to do reforms because the problem has to do with the supply side of the economy, which will take time.”

How do you evaluate the rating agencies’ recent decisions to downgrade Turkey’s outlook?

Losing an investment grade from Fitch is of course more important than another outlook downgrade from Standard & Poor’s, which never gave us [investment grade] in the first place. At a minimum, it means financing will get more expensive and the quantity of flows may also be affected. More broadly, it says something about Turkey not doing the right things in terms of the general direction of policies … So it is significant. Investment grade is an endorsement of sorts that you are on the right track.

Some would argue that these institutions have a tarnished reputation and that they should not be taken so seriously.

We don’t want to confuse two things. There is definitely a problem with the record of these institutions, especially in the run-up to the global crisis. That does not mean that what they are doing with regards to Turkey is wrong.

Obviously these rating agencies had to do some soul-searching but ultimately what they are saying about Turkey – as reasons for the downgrade – are not things that even Turks themselves can disagree with. They are saying your political risks have heightened, you have vulnerabilities and your central bank does not seem to be doing the right things. We have to take the message and try to improve things instead of being defiant – that’s counter-productive.

In a nutshell, what would be the proper reaction?

Simple. Work on yourself; work on your policies; make sure you go back to strong institutions and to a rule-based policy environment as in the early terms of AK Party [Justice and Development Party] governments; set your priorities straight. The Central Bank is in the hot seat. We have to leave the Central Bank alone. You have to show the world you are very serious about tackling your macroeconomic vulnerabilities – of high inflation, high current account deficit and high external financing requirement. People are worried about Turkey’s growth-vulnerability nexus; that is, low growth relatively speaking, but elevated vulnerabilities.
So basically you have to give people a “story” that you are serious about tackling these vulnerabilities and that you are working on structural reforms. Again, what is lacking from investors’ perspective right now is a sense of direction – politically and economically.

What do you think about the Central Bank’s move last week to readjust year-end inflation rates?

The Central Bank is ultimately buying time. They are stuck between low growth and high inflation. This is not something monetary policy can fix. Period. It has to choose one. If you want to fix both, you need to do reforms because the problem has to do with the supply side of the economy, which will take time. At the same time, what they can do is constrained by the currency. The more they want to support growth, the more they have to close their eyes to inflation. They are telling us they care about inflation most, but the reality is that inflation has not been the priority. They don’t want to lose control over the currency, as well as completely risk financial stability.

In last week’s announcement, market analysts took issue with the word “dynamic” monetary policy. To me, dynamic is bad news – it means whatever works; it means “I am going to be extremely discretionary.” Put differently, dynamic is not something we like when it comes to monetary policy; it has to be simple and predictable.

Nowadays, when you look at the mood of the man on the street, they criticize the elites for going too much by the book. This mood is being encouraged by a leader like U.S. President Donald Trump.

We are confusing two things again. There is resentment globally because the middle classes have been melting in advanced countries. This is not a Turkish problem. When you look at the last 10-15 years in Turkey, it has been a success story. The middle classes have expanded in Turkey. That’s been the case with many emerging markets. In that sense, globalization worked well for emerging markets. Now is the time to prioritize policies and focus on reforms; focus on what you are really good at to stand out from the crowd. Be modest and work hard.

Buying time until when?

That’s a great question I’m asking myself. Until this referendum gets out of the way, I suppose. But there are still so many uncertainties on post-referendum Turkey. First of all, if it is a “yes,” the political system is going to restructure itself from scratch and we’ll see what “yes” means in practice in terms of the actual governance of the country – and how institutions, reforms, so on will evolve…

If it is a “no,” that takes us into a whole different set of other challenges; early elections are obviously a possibility. So we are looking at actually a fair amount of volatility no matter what.  But at some point – first things first – you have to deliver some sense of stability and give the world very clear signals that you are serious about rebuilding your institutions and rebuilding peace. On the economy side, we should have a very comprehensive program as to where we want to take this country and build a consensus around it – sort of like what was done in 2001-02, after which the AK Party so successfully taken over, expanded and moved forward.

Some in Turkey are arguing that the world order economic order is changing and that the Bretton Woods system is collapsing, meaning Turkey should no longer accept the hegemony of the dollar.

But why are these things so relevant? To be frank, these are all distractions and deflections from real issues, in my view. It is very simple what Turkey needs to do: Turkey needs to work on its vulnerabilities, focus on its education system and transform its economy to a more export-oriented and investment-driven economy. This has nothing to do with Trump or the global order and how it is changing. To me, it looks like just because we don’t want to do our homework, we keep busying ourselves with this esoteric stuff.

But what do you see coming in terms of the economic world order and its implications on Turkey?

The international order is changing, no doubt, and probably for the worse. What that means for Turkey is simple – it has become all the more urgent that it has to put its house in order. The key thing not to forget here is that we live on other people’s money, and we have to keep attracting inflows to grow. There is a weakening of the so-called “push factor.” As we all know, the global conditions have been generally very beneficial for the emerging markets since the global crisis.

But the U.S. Fed – one way or another – is normalizing policy and so, is not going to be as generous any longer. The cost of borrowing is rising already. Trump is a completely unpredictable man. The push factors will no longer drive Turkey’s story. What do you do? You turn to “pull factors”: try to improve your institutions, your policies, your reforms and your skills.

What do you see happening in the short to medium term?

We will be lucky if we can continue muddling through like this. We are either going to formulate a clear direction ourselves, or markets are going to force us to adopt that direction or undertake adjustment. A low-growth, high-vulnerability nexus is not sustainable forever. So eventually, after the referendum, we have to have some political stability and economic perspective emerging slowly.

But at the end of the day, the whole world is not doing that well.

Sure, misery loves company. But is that what we want to do? Comparing yourself to basket cases and feeling better about it is not the way to go. You have to set ambitious targets for yourself no matter what. But more importantly, you need to have a very clear, detailed and credible road map as to how you will achieve those targets. One thing that is concerning me in this connection is that we are no longer peacefully, frankly and candidly debating our issues and challenges. Politicians are politicians: they are probably right to ask for higher growth and lower interest rates, to be frank. But we as the technical people need to debate properly, freely and rigorously about what is really right for Turkey.

This lack of clear diagnosis on what’s holding the Turkish economy back is very important and concerning.

The recipient of a B.A. from Boğazici University and a Ph.D. in economics from Boston College, Murat Üçer serves as Global Source Partner’s consultant in Turkey, as well as the co-founder of Turkey Data Monitor and a senior lecturer at Koç University. As a consultant, he provides macroeconomic expertise to commercial banks, multinational corporations and public sector organizations, and gives training programs and seminars on Turkish and global macroeconomic developments.

Üçer previously worked as an economist at the Institute of International Finance, Credit Suisse, and the International Monetary Fund and was an advisor to the Turkish Treasury in 2001 and the Central Bank governor in 1997.

Üçer has authored several articles on the Turkish economy, including a book on the 2001 Turkish crisis.