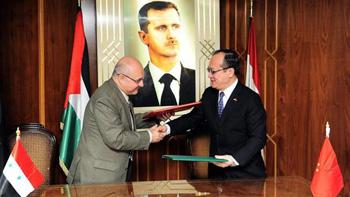 China is set to provide Syria with some 16 million dollars worth of humanitarian aid under cooperation agreements with the Damascus government.

On Sunday, the Chinese Embassy and the Syrian Planning and International Cooperation Commission (ICC) signed two agreements, under which Beijing will send two batches of humanitarian aid worth 16 million dollars to the Arab country.

China’s envoy to Syria Qi Qianjin said the aid delivery will begin soon, adding that his country has been committed to providing crisis-hit Syria with aid over the past years.

“We sympathize with the Syrian people for what has befallen their country, and we are signing this agreement with the aim of bolstering friendship between the Chinese and Syrian peoples and to fulfill the international obligations and responsibilities,” he said.

The Chinese ambassador further praised the diplomatic process aimed at restoring peace to Syria, which has gathered pace after the liberation of the strategic city of Aleppo by Damascus’ forces last December.

The victory was followed by a ceasefire agreement affecting the city, which was brokered by Russia on the side of the Syrian government and Turkey on behalf of the militants. The mediators later helped expand the agreement to entire Syria.

Also contributing to the conclusion and implementation of the agreements was Iran, which has been supporting the Syrian government and people since 2011, when foreign-backed militancy engulfed the nation.

The Chinese official also hailed the two-day peace talks held between the Syrian government and opposition groups in the Kazakh capital, Astana, in January with the mediation of Iran, Russia and Turkey.

The Astana event is viewed as a diplomatic milestone, with observers saying the talks showed the influential role of Iran, Russia and Turkey in the Middle East as well as the diminishing influence of the US and its Western allies in the region.

Syria’s warring sides will resume their talks in the Swiss city of Geneva on February 20. The upcoming negotiations will be held under United Nations auspices.

‘Astana no replacement for Geneva’

He said Moscow supports the Geneva talks, adding, however, that “we are not planning to replace Geneva with the Astana format.”

The Geneva talks had originally been planned to take place on February 8, but the United Nations Syria envoy Staffan di Mistura said he had rescheduled them to take further advantage of the fruits of the Astana discussions.