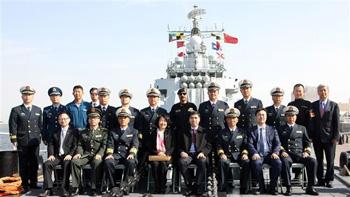 A Chinese naval fleet has wrapped up visits to four Arab states in the strategic Persian Gulf region.

The Chinese task force, consisting of the guided-missile destroyer Harbin, the guided-missile frigate Handan, and the supply ship Dongpinghu, departed Kuwait on Sunday after stopping in Saudi Arabia, Qatar, and the United Arab Emirates, media reported on Monday.

China’s navy has used the patrols to build its capacity to operate far from home ports. It has also been building a logistics center in Djibouti, which some observers consider to be China’s first overseas military base.

China’s Djibouti facility will give the Asian powerhouse ready access to the Mediterranean Sea.

In 2011, China sent one of its most sophisticated warships together with military transport aircraft to help with the evacuation of about 35,000 Chinese citizens fleeing the unstable situation and fighting in Libya.

In 2015, China sent three navy ships from the anti-piracy patrols to rescue Chinese citizens and other foreign nationals from Yemen, where a Saudi Arabian war has just been launched.