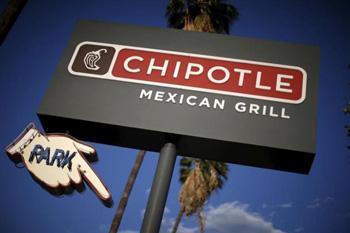 CMG.N) could fall as much as 35 percent in the next year, Barron’s reported on Sunday.

The burrito chain is moving beyond a sales decline caused by widespread 2015 outbreaks of tainted-food scandals but its stock is now over valued, Barron’s said.

Chipotle shares have increased 8 percent in the past three months to $404 amid an activist led board shuffling, but still trade at 49 times the consensus earnings estimate for 2017, Barron’s said.

“A healthy return for investors from here would require either that Chipotle blast past growth estimates in coming years or that shareholders maintain their enthusiasm as growth slows,” the paper said.

Barron’s, however, did include in its article a bull case for the company from RBC Capital, which has a target price of $465. Another analyst even said the stock could reach $560 under certain circumstances.

“There are 27 analysts who are offering 12-month price targets for Chipotle shares, with a median of $400 a share and a high of $564,” Chris Arnold, a spokesman for Chipotle said in an email.

“We don’t speculate about what the stock might do, nor do we comment on daily stock price fluctuations. We have made significant progress in our recovery and are optimistic in the strategy we have set out for 2017,” Arnold said.