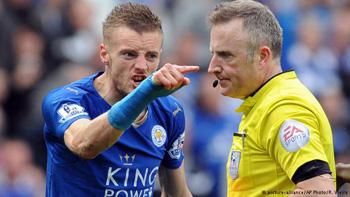 Surprise soccer champions from last season Leicester City are in danger of relegation from the English Premier League. After losing to Manchester United on Sunday, the Foxes are now only a point off the relegation zone.

Manchester United extended their unbeaten Premier League run to 15 games with the 3-0 win in Leicester on Sunday.

Henrikh Mkhitaryan’s run and finish broke the deadlock in the 42nd minute and Zlatan Ibrahimovic added a second with a first-time strike 88 seconds later, his 15th league goal of the season. Juan Mata made it 3-0 in the 49th minute.

Leicester hasn’t scored in five league games in 2017 and is still without a win away from home all season. In 24 games of the title defense, Leicester has lost 13 of them.

With progress in the Champions League a key priority this season, Italian trainer Claudio Ranieri’s team are now in 16th place in the 20-team league, one point above the relegation zone with 14 matches left.

Leicester were top of the league this time last year on their way to the most remarkable title triumph in Premier League history.

“Let’s not talk about last season. It’s gone,” Leicester goalkeeper Kasper Schmeichel said. “It is not a comfortable situation. It has been terrible, embarrassing. It is time for each one of us – from the top to the bottom of this club – to be counted. If we don’t, we will be relegated.”

It’s 79 years since a defending champion was relegated from England’s top division, Manchester City in 1938.

Reports of dressing-room discord have surfaced in the British media in recent weeks and it is clear that the team misses the influence of central midfielder N’Golo Kante, who moved to Chelsea in the offseason, while other star players from last season – notably

The next crunch game is next weekend at 17th-placed Swansea.