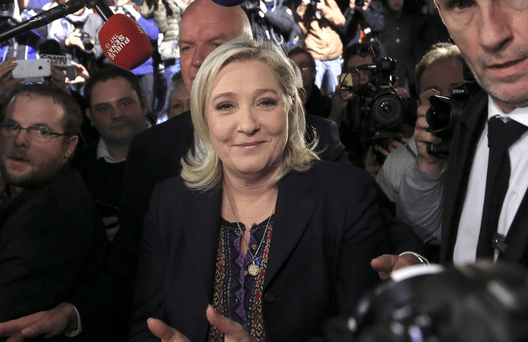 ‘Is that him? It’s the sound of his motorbike escort, I’m sure of it!” The heaving crowd I found myself in under the scorching Sicilian sun late last September was edgy, expectant and oh-so Italian.

Who was the handsome leather-clad biker on a purring Piaggio amid whoops and yells of adulation? No film star or pop idol, I soon discovered, but Alessandro di Battista, a prominent figure in the populist Five Star Movement – an opposition party, but Italy’s most talked-about political group.

Mr Di Battista’s slogan is not dissimilar to Donald Trump’s rallying cry to “put America first”. It’s a sentiment I’ve been exposed to increasingly of late while filming a new documentary ‘After Brexit: The Battle for Europe’. From Sicily I travelled to Brussels, Paris and Berlin meeting the nationalist anti-establishment leaders taking Europe by storm. The languages may change, but the message does not.

‘Au nom du peuple’ – ‘In the name of the people’ – is the banner under which Marine Le Pen is fighting to become France’s next president. Once on the fringes of the far right, the National Front has had a surge in popularity.

Marine, as she likes to be called, has worked hard to cleanse her party of the virulently anti-Semitic, xenophobic image that thrived under her father’s leadership. French voters are no longer ashamed to admit they support the National Front.

So does that mean France is lurching to the far right? Are millions of Europeans – supporting the Danish People’s Party, the Freedom Party of Austria, the Alternative for Germany, the Netherlands’ Party for Freedom and similar movements – all white supremacist xenophobes? Hardly.

Are all these parties now entirely free of racist, far-right elements? Absolutely not.

At a fast food stand in Berlin, I listened to a heated conversation about what three German office workers deemed the “umpteenth Greek bailout”.

“We have to help,” a middle-aged woman said. “What have those poor Greeks got?” “That’s what I hate about the damned euro,” exploded her colleague. “We’re forced to help. But why on earth should I dig deep?”

It turned out that the euro-hater, Joerg, a computer programmer, was an enthusiastic supporter of the Alternative for Germany party.

“Why do Germans have to be economically liable for everyone else?” Joerg said. “AfD says out loud what I think. Finally I feel represented.”

This is election year in Germany and the party has now set its sights on the raging immigration debate, prompted by a recent slew of attempted and successful terrorist attacks and the arrival of more than a million asylum seekers.

This is how Europe’s populists have been able to storm their way up the public opinion polls. There’s always a part of society that feels ignored, neglected and left behind by the political establishment, but the number of angry and resentful voters has exploded in Europe.

“2016 was the year the Anglo-Saxon world woke up – first with Brexit, then with Donald Trump,” Ms Le Pen told me at her campaign HQ in Paris. “2017 will be the year of European patriots.”

With elections in France, Germany and the Netherlands this year, we soon will find out.

Though their policies vary, a Eurosceptic, anti-immigration and nostalgic nationalist vein runs through all of those moving right.

Yet the stigma of the National Front and Austria’s Freedom Party has led them to claim they are “neither of the right, nor the left”. They have leftist social policies, such as demanding dignity for workers, while striking the security-minded tones so popular with the right – but, above all, they have launched a marketing drive to entice Europe’s anxious middle classes of the political centre.

I’m not convinced Ms Le Pen will win – but it is more likely Europe’s anti-establishment parties will perform so well that their shouting from the sidelines will become even more influential.

That prospect is troubling the EU and Nato. Many of Europe’s populists, notably Ms Le Pen, are close to Moscow. They are also admirers of President Trump. A weaker Europe and a fractured, even vanquished EU, would suit Vladimir Putin and Mr Trump.

This is where the explosion of populism in Europe takes on a more global dimension: with much at stake and many nervous of how Mr Trump’s presidency may evolve voters may be tempted back into the better-the-devil-you-know camp of political parties.

But there is no telling what might happen: polls are unreliable, accepted wisdom crushed. Europe’s voters are in a volatile mood. (© Daily Telegraph, London)