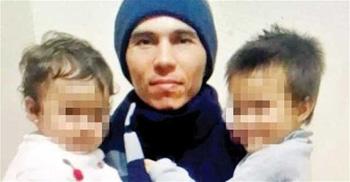 The wife of an Islamic State of Iraq and the Levant (ISIL) militant who attacked a famous Istanbul nightclub at the heart of the city has said the jihadist group took her 4-year-old son to Iran.

Reina attacker ISIL militant Abdulkadir Masharipov’s wife, Zarina Nurullayeva, who was arrested on Feb. 4 on charges of “being a member of an armed terrorist organization” and “attempting to abolish the constitutional order,” asked the police to find her missing son, while also denying all the charges against her.

At least 39 people, including a police officer, were killed when Masharipov opened fire on New Year’s revelers in the Reina nightclub in Istanbul’s Ortaköy neighborhood at about 1:15 a.m. on Jan. 1. Masharipov was captured in the Esenyurt district of Istanbul late on Jan. 16.

“Before we were detained, two people came to me and told me that they are going to take my son to Iran and said that my husband knows about it,” Nurullayeva, who was alleged by the police to be an ISIL member, said in her testimony.

Masharipov and Nurullayeva have two children. The 4-year-old son is currently being sought by the police, while the couple’s other child, an 18-month-old girl, was sent to jail with her mother.

Nurullayeva also described how she and Masharipov arrived in Turkey.

“We arrived in Turkey via illegal means from Iran. My husband left the house three days before the incident and then the attack happened. After the [Reina attack] my husband’s friend took me to another place. When I asked what happened to my husband, he said, ‘Don’t ask questions,’” she said.

In her testimony, Nurullayeva said the same person who took her to another house after the attack returned the next day.

“He told me to mourn for my husband. However, he later visited me once again and said ‘You don’t need to mourn, your husband didn’t die. I asked him ‘What happened? Where did he go? Why was he martyred?’ He said ‘Your husband did big things.’ When I asked the police why they arrived to take us, I learned that my husband carried out the Reina attack. I didn’t know until then,” she added.

Nurullayeva also said “she helped the police as best as she could.”

“I want you [the police] to find my son. I have no relation to these things. I demand my release. My husband left me. I’m left alone with two children,” she said.

Claiming that her husband told her that he swore allegiance to ISIL in Pakistan, Nurullayeva noted that she refused to go to Syria with Masharipov.