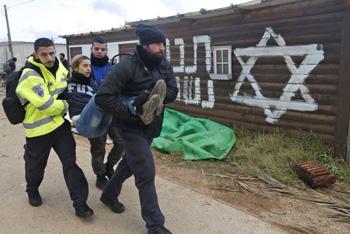 In his inimitable fashion, U.S. President Donald Trump has succeeded in beginning a national conversation about immigration. It is not the nuanced, cerebral discussion about the value of migrants versus the danger of terrorists that Americans need to have, but despite — or perhaps because of — the horribly amateurish rollout of his immigration executive order, the U.S. is at least beginning to talk.

That is more than can be said of Israel and its policy in the West Bank. This was a bitterly painful week, as Israelis watched hundreds ofpolice and security personnel forcibly remove residents of the illegal Amona settlement. Israeli media broadcast images of men and women weeping as they were removed from their homes, of troopsramming open the doors of a synagogue to evict those barricaded inside, and of some of the security personnel overcome with emotion and grief.

The evacuation of Amona was ordered by the Supreme Court, which had held that the settlement had been built on private Palestinian land. Despite many attempted legal maneuvers designed to skirt the court’s ruling over the past few months, Amona’s settlers lost. So this week, the country watched with rapt attention as Israeli civilians battled Israeli police, dozens of policemen and women were injured, and Jews evicted other Jews from their homes.

Prime Minister Benjamin Netanyahu tried to appease everyone this week. He urged that there be no violence, but also pledged that he would build these families a new settlement, the first new government-sanctioned West Bank settlement in 25 years. His government also announced plans to build thousands more housing units in the West Bank, which many Israelis refer to using the biblical terminology of Judea and Samaria, to stress ancient Jewish ties to that land.

Netanyahu is playing a coy political game, trying to appease the international community, the Supreme Court and the settlement movement all at the same time. Yet that tactic cannot work forever. He cannot know what the Trump administration’s positions are going to be, because the U.S. president originally indicated support for the settlement project, but reversed course and reined in Netanyahu on Thursday after the announcement of the new construction.

More significantly, Netanyahu’s tepid admonishment of the thugs(apparently not residents of Amona) who used the most violence against police stood in stark contrast to his thundering accusationsthat Arabs were behind Israel’s recent spate of fires — accusations which appear to have been baseless. Intentionally or not, his stance communicates a nonchalance about violence that can only erode Israel’s commitment to the rule of law.

What is at stake for Israel, however, is not only law and order, but the vision of a Jewish and democratic state. Those right-wing leaders — including Naftali Bennett, with his prime ministerial aspirations — who argue that Israel should annex the entire West Bank, owe it to Israelis to explain their plans. What will happen with the millions of Palestinians who live there? Will they be forcibly evicted and moved to Jordan? Will they be granted civil rights but not voting rights, an anti-democratic move that gives justification to those who will say that Israel has become an apartheid state? Will they grant all those Palestinians complete Israeli citizenship, thus weakening the Jewish demographic edge and threatening the nation’s Jewish character altogether? These are all difficult questions.

In two years, Netanyahu will become Israel’s longest serving prime minister, eclipsing the tenure of David Ben-Gurion, Israel’s founding leader. Unlike Ben-Gurion, who wrote many books, hundreds of columns and thousands of pages articulating his vision for a Jewish state, Netanyahu has kept his cards close to his chest. Does he have a vision, beyond placating as many people as he can so he can stay in power? No Israeli knows. Settlement policy is the single most important issue that will shape the nation’s future, and for decades now, Israelis have implicitly acceded to Netanyahu’s determination not to discuss it.

This week’s images of heartbreak, violence and wounded bodies, however, ought to get Israelis to see the urgency of having the major conversation. Israelis would do well to look not only at the U.S.’s turbulent present, but also at its precarious past. The Founding Fathers chose not to settle the question of slavery at the Constitutional Convention, for fear that the issue would scuttle the document’s passage. The issue festered for decades, until it exploded into war in 1861 and nearly doomed the union.

The U.S. was 85 years old when the Civil War erupted; only 74 years had passed since the Constitutional Convention. Israel will celebrate its 70th anniversary of independence next year, and like America of 1861, is unlikely to have addressed head on the singular issue that may determine its future. The violence of this week could pale in comparison to what awaits Israel if its two political camps do nothing to forge a bond and imagine a shared future.

Netanyahu has often campaigned on the premise that a “strong nation needs a strong leader,” and Israelis at the polls have signaled their agreement. The violence at Amona this week ought to remind them, though, that what they need is a leader not only strong enough to defend Israel against its enemies, but no less, one who is strong enough to start the conversation the Jewish State desperately needs to have.