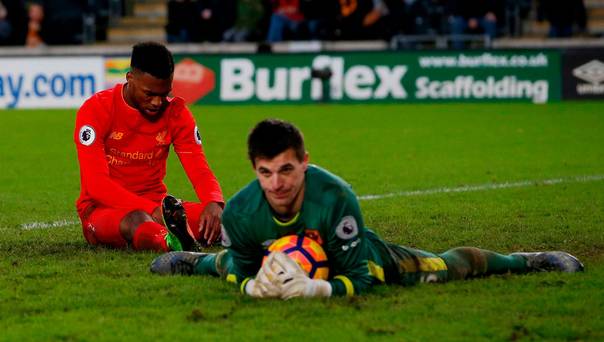 Liverpool legend Jamie Carragher has warned his former club need to alter their tactics after they crashed to a defeat at Hull, as he suggested they are only the SIXTH best squad in the Premier League.

Hull were the latest team to inflict a blow on Liverpool‘s crumbling season, as they secured a 2-0 win against Jurgen Klopp’s men to add to their recent misery.

A disastrous January saw Liverpool crash out of the FA Cup and EFL Cup, while also surrendering their hopes of title challenge.

Now Carragher suggests their top four bid will also end soon unless they find some winning form in the next few weeks.

“I imagine after the weekend they’ll be outside the top four and they will be outsiders now,” Carragher told Sky Sports.

“People will keep saying they have played a lot of the top teams but in their next home games they have got Tottenham and Arsenal.

“You would expect them to do well in those games, they always do, but the majority of matches they have struggled in have come against teams in the bottom half of the table. That’s where they have major problems.

“Off the back of the cup exits, the only thing left for Liverpool is to qualify for the Champions League. If they do, I still think it would make a successful season.”

Carragher also offered up a damning verdict on Klopp’s squad, as he suggested they need plenty of additions to match their top four rivals.

“Liverpool have got the sixth-best squad in the league for me, but I think the quality of the manager puts them where they are,” he suggested.

“It’s getting to the stage now when Liverpool have got to have a different plan.

“We talk about a Plan B but Liverpool have just one plan. It worked outstanding in the first four or five months of the season but they are in a sticky patch at the moment and I think it’s obvious how you set up against them.

“You make it difficult through the centre of the pitch and you counter attack. That’s what Hull did and they did it outstandingly well.”