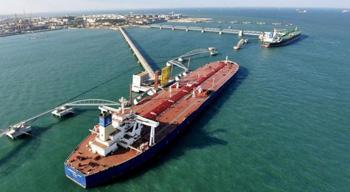 Oil prices edged up on Monday on fears that new U.S. sanctions against Iran could be extended to affect crude supplies, but markets were capped by further signs of growing U.S. production.

Brent crude futures, the international benchmark for oil prices, were trading at $56.91 per barrel at 0320 GMT, up 10 cents from their last close.

Traders said the strain between Tehran and the United States raised concerns that U.S. sanctions could be tightened further to impact Iranian oil exports, which were only allowed to return to normal last year.

“This was countered somewhat by data showing another strong rise in rig activity in the U.S.,” ANZ bank said on Monday.

U.S. drillers added 17 oil rigs in the week to Feb. 3, bringing the total count up to 583, the most since October 2015, energy services firm Baker Hughes Inc said on Friday.

Rising U.S. production undermines efforts by the Organization of the Petroleum Exporting Countries (OPEC) and other producers like Russia to a end global oil oversupply by cutting their output by a planned average of almost 1.8 million barrels per day (bpd) during the first half of the year.

Also delaying the market rebalancing are OPEC’s efforts to shield its biggest customers in Asia from the cuts, as the group reduces supplies to regions in Europe and North America where demand growth is slower or where other suppliers are more dominant.

This is evident in price movements. Brent crude futures are more than 2 percent below their peak in early January, when the cuts started.

Further downward pressure could come from a slowdown in Chinese imports, a core pillar of global demand growth over the past years.

“China’s crude oil imports will soften in H117, due to a heavy refinery maintenance season and weaker run-rates at the independent teapot refineries,” BMI Research said.

A reduction in the import quotas for China’s independent refiners will also weigh on the overall import demand, said BMI. The researchers noted that the first round of 2017 licenses were 6.7 percent lower at 68.81 million tonnes than the year ago period.