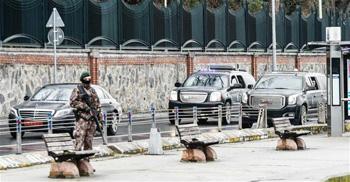 The camp opposing the constitutional changes is composed of the outlawed Kurdistan Workers’ Party (PKK), the Fethullahist Terror Organization (FETÖ) and the People’s Democratic Party (HDP), Prime Minister Binali Yıldırım has claimed, calling on people to vote “yes” after identifying who is saying “no” to the charter amendments.
“Why do we say ‘yes?’ We say ‘yes’ because the PKK says ‘no.’ We say ‘yes’ because FETÖ says ‘no.’ We say ‘yes,’ because the HDP says ‘no.’ Make up your decision after seeing these naysayers,” Yıldırım said in an address to crowds gathering for the opening ceremony of an urbanization project in Istanbul.

Turkey will hold referendum in mid-April to decide whether to change the government system into an executive presidency with vastly enhanced powers for the president or to protect the current parliamentary system. The project is being endorsed by President Recep Tayyip Erdoğan, the ruling Justice and Development Party (AKP) and the Nationalist Movement Party (MHP).

Criticizing the main opposition Republican People’s Party (CHP) for not supporting the changes, Yıldırım slammed CHP leader Kemal Kılıçdaroğlu for describing the legislative move as an attempt to impose a regime change.

“Remember, when we attempted to lift the ban on the use of headscarves, they categorized it as a regime change. They labeled our move to remove such an undemocratic ban as a regime problem at that time,” Yıldırım said.

Turkey ended its regime problem in 1923 with the declaration of the Republic of Turkey, the prime minister said.

“Wake up now, Mr. Kemal. Turkey has chosen its regime. We declared the republic in 1923. And today we are putting forward the new constitution that will further improve our republic to the consideration of our people,” he said.

In the meantime, Erdoğan and Yıldırım met in Istanbul for a face-to-face meeting late afternoon on Feb. 5. The meeting came after parliament submitted 18 articles to the presidency for the approval of Erdoğan, who has 15 days to approve the changes.

In the likely event that Erdoğan signs the changes and publishes them in the Official Gazette before Feb. 7, the referendum will be held on April 9, but if he does it after Feb. 7, then the referendum is likely to occur on April 16.

The final decision on the date of the referendum will be given by the Supreme Election Board (YSK).