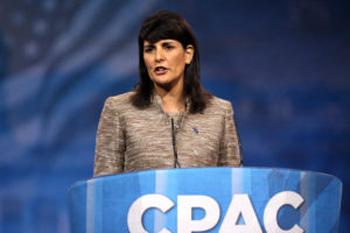 Well, that didn’t take long, did it? The Trump administration hadn’t even reached its two-week mark when it surrendered a major portion of its independence and fell in behind the reigning Washington orthodoxy.  The turning point came at the United Nations Security Council on Thursday when Ambassador Nikki R. Haley blasted Russia for the upsurge of violence in the eastern Ukraine.

Haley’s statement could hardly have been stronger. She not only assailed Russia for its “aggressive actions,” but described them as “a replay of far too many instances over many years” when it has behaved the same. She called for a “clear and strong condemnation,” declared that the crisis would not end “until Russia and the separatists it supports respect Ukraine’s sovereignty and territorial integrity,” and demanded the return of Crimea as well.

“Crimea is a part of Ukraine,” Haley said. “Our Crimea-related sanctions will remain in place until Russia returns control over the peninsula to Ukraine.”

This must be disappointing news for New York Times columnist Paul Krugman, among others, who has long bashed Trump as a “Siberian candidate” and on Friday accused him of stirring up trouble with everyone except puppeteer Putin. “[T]he war with China will, it seems, have to wait,” he wrote.  “First comes Australia. And Mexico. And Iran. And the European Union.  (But never Russia.)” Thanks to Haley’s stirring call to arms, it looks like Moscow is now in America’s sights as well.

What does it mean? Simply that Trump’s foreign policy has already lost an engine before it has gotten off the ground. The man is a bully, a racist, a xenophobe, and more than bit crazy to boot. But despite all that – or perhaps because of it – he has shown an ornery streak in some of his thinking about foreign policy that placed him sharply at odds with Washington’s vast pro-war establishment. He favored a rapprochement with Russia, for example, as well as a new approach in Syria in which the problem of Bashar al-Assad would be put off in order to concentrate on fighting ISIS and Al Qaeda.

This was not very different from what Bernie Sanders was saying about the dangers of U.S.-imposed regime change in Syria, but utterly at odds with Hillary Clinton’s insistence that Assad had to go because he was somehow aiding ISIS and Al Qaeda when in fact he was engaged in a life-or-death struggle with both entities.

So amid all the bluster and braggadocio, racism and Islamophobia, there was one slim reed to hold onto: Trump seemed to be capable of at least a modicum of realism when it came to one or two trouble spots around the globe.

But then came the post-election back-tracking. On Nov. 18, Trump named Michael Flynn, a former chief of the Defense Intelligence Agency, as his national security adviser even though Flynn is renowned for his fierce anti-Russian views. Two weeks later, he named the no-less-hawkish James Mattis as his Secretary of Defense. At his confirmation hearing, Mattis described Russia as a “principal” threat to U.S. interests and declared that the U.S.-led world order was “under the biggest attacks since World War II from Russia, terrorist groups, and China’s actions in the South China Sea.”

After once predicting that Clinton’s proposal for a Syrian no-fly zone would “end up in World War III,” Trump also vowed to fix “what’s going on in Syria” by building “safe zones … so people can have a chance.” Then, just this past Sunday, he telephoned King Salman of Saudi Arabia and Crown Prince Mohammed bin Zayed Al Nahyan of neighboring Abu Dhabi to obtain their political and financial support.

“The President requested and the King agreed to support safe zones in Syria and Yemen,” a White House statement said, “as well as supporting other ideas to help the many refugees who are displaced by the ongoing conflicts.” Where Hillary Clinton had called for just one no-fly zone, Trump was now committing to two.

As if that wasn’t bad enough, Trump also gave the go-ahead for last Sunday’s disastrous raid on a reputed Al Qaeda hideout in southern Yemen that ended with one American commando killed along with as many as 30 civilians, including the eight-year-old daughter of Anwar al-Awlaki, the Al Qaeda propagandist and U.S. citizen who was eliminated in a drone strike in 2011.

On Wednesday, Trump allowed Flynn – whose resemblance to Brigadier General Jack D. Ripper, a character in “Dr. Strangelove,” grows ever more striking – to announce that the administration was “officially putting Iran on notice” for conducting a ballistic missile test and for backing Houthi rebels who a day earlier had fired a guided missile at a Saudi warship off the coast of Yemen.

In other words, Washington was returning to its usual disastrous ways as the administration took aim at all the usual suspects and dealt in the same self-serving half-truths that have long characterized Official Washington.

But none of it made any more sense than it did before the election.  For example:

–Safe zones will not make Syria safer. To the contrary, they could well emerge as safe havens for jihadists and their families and come under attack by other rebel factions or by government forces. U.S. forces would have no choice but to respond and would thus find themselves drawn into another Middle East ground war.

–They would require the U.S. to secure the skies to prevent air attacks. This means taking out Syria’s sophisticated air defense system, an effort that, as Gen. Martin E. Dempsey, chairman at the time of the Joint Chiefs of Staff, told the White House in early 2012, would require as many as 70,000 American military personnel and cost as much as $1 billion a month – and that was before Syria upgraded its defenses by adding advanced S-400 Russian anti-aircraft missiles.

–A safe zone in Yemen is even more bonkers. In August, the U.N. Human Rights Council reported that 84 percent of civilian deaths were due either to Saudi-backed ground forces or Saudi-led air strikes, strikes that the U.S. enables by providing Saudi Arabia with advanced weaponry, targeting data, and midair refueling. So what’s the point of a U.S.-backed safe zone if the problem is U.S.-backed air assaults?

–As for the botched raid in Yemen, the U.S. government again is in contradictory situation because the Houthi rebels who were fighting Al Qaeda’s local affiliate have lost ground to the terror group because of the U.S.-backed Saudi intervention against the Houthis. In a recent report, the International Crisis Group found that Al Qaeda “is thriving in an environment of state collapse, growing sectarianism, shifting alliances, security vacuums, and a burgeoning war economy.”

In “Yemen Under Siege,” a PBS documentary aired last May, journalist Safa Al Ahmad filmed Al Qaeda units fighting side by side with forces backed by the Saudis and the United Arab Emirates. (See clip starting at 8:38.) So, why battle Al Qaeda with one hand while aiding it with the other? Again, the U.S. has gotten itself into the bizarre position in which Al Qaeda is simultaneously its enemy and an ally of its best friend. [For more, see Consortiumnews.com’s “The Secret Behind the Yemen War.”]

–As for the flare-up in the eastern Ukraine, a dispatch by Radio Free Europe / Radio Liberty – of all outlets – made it clear as to who is responsible: Ukraine.

As RFE wrote: “Frustrated by the stalemate in this 33-month war of attrition, concerned that Western support is waning, and sensing that US President Donald Trump could cut Kyiv out of any peace negotiations as he tries to improve fraught relations with Moscow, Ukrainian forces anxious to show their newfound strength have gone on what many here are calling a ‘creeping offensive’…

“[S]ince mid-December, Ukraine’s armed forces have edged farther into parts of the gray zone in or near the war-worn cities of Avdiivka, Debaltseve, Dokuchaievsk, Horlivka, and Mariupol, shrinking the space between them and the separatist fighters.  In doing so, the pro-Kyiv troops have sparked bloody clashes with their enemy.”

“Your fight is our fight,” Graham told one group of fighters. “2017 will be the year of offense. … Enough of Russian aggression. It is time for them to pay a heavier price.” Added McCain: “The world is watching because we cannot allow Vladimir Putin to succeed here, because if he succeeds here he will succeed in other countries.”

So the offensive that Nikki Haley denounced was not the work of Russia but of Ukraine with encouragement from two leading U.S. advocates of confrontation. The target was not only to bloody pro-Russian forces in eastern Ukraine but to mess up rapprochement with Russia in the West. The goal was not only to force Putin “to pay a heavier price,” but to checkmate Trump by presenting him with a case of cooked-up aggression that he wouldn’t dare deny amid Washington’s feverishly pro-war climate.

A savvier politician might have seen through the maneuver and turned tables on the hawks. But Trump is not savvy. Rather, he’s a failed real-estate man with little idea of how the world – beyond his narrow focus – works. He may be nonpareil on the campaign trail, but in Washington he’s easy prey for a couple of experienced operators like McCain and Graham.

What next? Maybe Trump has a card up his sleeve or is engaging in some arcane maneuver too subtle for ordinary observers to follow. Or maybe his young administration is beset with chaos from competing factions that Trump has been unable to bring under control.

Otherwise, it’s hard to see how he can avoid being locked into a policy of renewed confrontation. “The fog of war” may have given way to “the fog of policy,” as Anna Nemtsova observes in the right-of-center Daily Beast.

But the rough outlines are beginning to emerge of an on-going showdown in Ukraine and a renewed alliance with Saudi Arabia and the other Gulf states. This means deepening U.S. intervention in Yemen and Syria on the pro-Saudi side and hence tacitly in alliance with Al Qaeda. It means more fighting, more chaos, and more refugees. The more things change, the more they remain the same.

Some will blame what’s known as the Deep State. It’s not the President or Congress who rules, they will argue, but a vast sprawl consisting of the Pentagon, the arms industry, and 17 intelligence agencies employing hundreds of thousands. All are deeply invested in a pro-war policy and will therefore have their way.

This is true. But it’s also worth pointing out that foreign policy is never just an idea. It’s a system of interlocking military alliances based on long-term strategic planning. The U.S. is partners with Riyadh not because it necessarily likes the Saudis’ extreme version of Sunni Islam known as Wahhabism, but because they sit on top of a fifth of the world’s proven fossil fuel reserves, a prize that the United States has controlled since World War II and one that it will not easily relinquish.

Just as the U.S. built up the Saudi oil industry from scratch, it similarly built up NATO and will not easily walk away from that alliance either. The international architecture is not completely unchangeable, but it will take more than a single loud-mouthed businessman to do it, particularly one as reactionary and confused as Donald Trump.