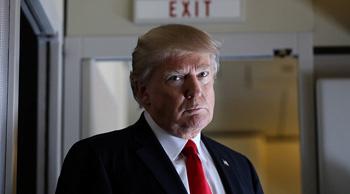 California could see its federal funding reduced to a trickle if it votes to become a so-called sanctuary state, with President Donald Trump saying that he might use defunding as a “weapon” to deter local and state authorities from refusing to abide by federal immigration laws.

President Trump covered a number of topics in a pre-Super Bowl interview with Fox News presenter Bill O’Reilly, zeroing in on Mexican cartels and the US-Iran nuclear deal. However, it was arguably for California and a bill introduced by Democratic Party senator Kevin De Léon that the commander in chief reserved the strongest words.

He said that despite wanting to provide California with money to “properly operate,” he would willingly deprive it of funding if it became a sanctuary state.

“As you know, I’m very much opposed to sanctuary cities – they breed crime, there’s a lot of problems,” Trump said, without providing examples.

“If we have to, we’ll defund. We give tremendous amounts of money to California. California in many ways is out of control. Obviously, the voters agree, otherwise they wouldn’t have voted for me.

According to government estimates, California receives upward of $300 billion in federalfunding.

Senate Bill 54 is currently under consideration in California and has been presented by Senator De Leon as a way to establish trust with immigrants who “are valuable and essential members of the California community.”

On the deal to drop sanctions against Iran in exchange for the Islamic Republic’s reduction in nuclear capacity, President Trump once again said it was the “worst deal I’ve ever seen negotiated.”

Questioned on whether he would tear up the deal, Trump remained tightlipped.

“We’ll see what happens. I’ll tell you this, they have a total disregard for our country. They are the number one terrorist state. They’re sending money all over the place, and weapons.”

Asked if sanctions were the way forward, President Trump said they have “just started,” referring to a recent US Treasury Department announcement.

He also expressed his belief that the Iran nuclear deal had not brought the nations closer together.

He said: “It was just the opposite, it’s like they [Iran] are emboldened. They follow our planes, they circle our ships with their little boats and they lost respect because they can’t believe anyone could be so stupid as to make a deal like that.”

Turning to Mexico, Trump largely centered on efforts to hit Mexican drug cartels where it hurts. He said his working relationship with Mexican President Enrique Pena Nieto was “very good.”

“He seems very willing to get help from us because he has got a problem and it’s a real problem for us. Don’t forget, those cartels are operating in our country and they are poisoning the youth of our country.”