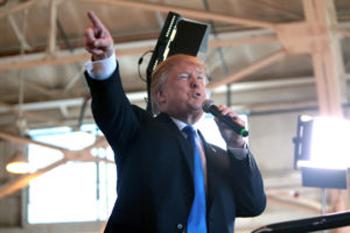 The president, in the interview aired Sunday on Fox Sports ahead of Super Bowl LI, defended his past complaints about “illegals” potentially voting.

“You take a look at the registration, you have illegals, you have dead people … it’s really a bad situation,” he said.

Though Trump did not sign a previously expected executive order initiating a voter fraud probe, he said in the interview he’s going to assign Pence to the job, seemingly making good on a vow to hold a “major” investigation.

“I’m going to set up a commission, to be headed by Vice President Mike Pence, and we’re going to look at it very, very carefully,” he said.

The president – who lost the popular vote by nearly 3 million but won the Electoral College and with it the White House – has insisted since the election that millions of illegal immigrants and others improperly cast ballots.

Amid criticism of those claims and questions about what proof he has, however, Trump appeared to pull back Sunday on the allegations of rampant voter fraud, focusing more on voter registration problems as evidence.

On the heels of his administration imposing new sanctions on Iran-tied businesses and individuals in response to recent missile tests, Trump also said Iran has “total disregard” for America and revived his criticism of the 2015 nuclear deal struck by his predecessor. The agreement with other world powers lifted billions in economic sanctions on Iran in exchange for the country curtailing its nuclear weapons program.

Trump called it “the worst deal I’ve ever seen negotiated.”

He said he wasn’t outright opposed to the deal, but claimed that it hasn’t been enforced.

“They’re sending money all over the place and weapons, and you can’t do that,” he said.

He continued, “That deal, I would have lived with it if they said, OK we’re all together now. But it was just the opposite, it’s like they’re emboldened.”

As for the new sanctions, Trump said, “just starting.”

Trump would not confirm reports that the U.S. has repositioned a key warship, after accusing former President Obama of revealing too much.

“I won’t give away military secrets,” he said.

As for domestic policy matters, Trump told O’Reilly he intends to have a replacement ready for ObamaCare by the end of the year or in early 2018.

He acknowledged that replacing the troubled health care law that now covers as many as 20 million Americans is “very complicated.”

As for his recent calls to foreign leaders, Trump said he has “respect” for Russian President Vladimir Putin, but that respect does not mean they’ll get along.

“I say it’s better to get along with Russia than not,” he said. “And if Russia helps us in the fight against ISIS, which is a major fight, and Islamic terrorism all over the world — that’s a good thing. … Will I get along with him? I have no idea.”