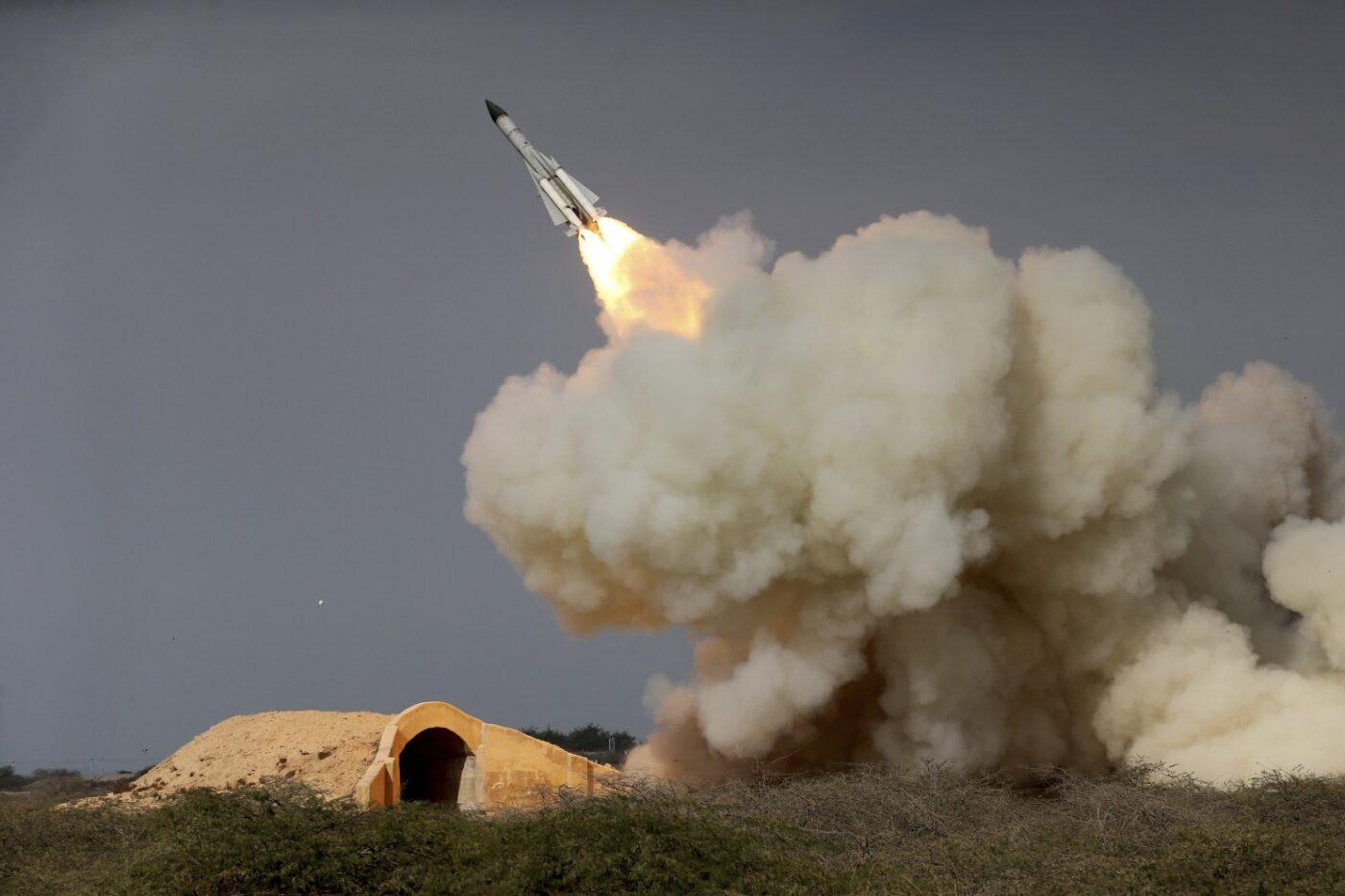 By Liz Sly and Loveday Morris –  The Washington Post

BEIRUT — President Trump’s tough talk on Iran is winning him friends in the Arab world, but it also carries a significant risk of conflict with a U.S. rival that is now more powerful than at any point since the creation of the Islamic republic nearly 40 years ago.

With its warning last week that Iran is “on notice,” the Trump administration signaled a sharp departure from the policies of President Barack Obama, whose focus on pursuing a nuclear deal with Iran eclipsed historic U.S. concerns about Iranian expansionism and heralded a rare period of detente between Washington and Tehran.

Many in the region are now predicting a return to the tensions of the George W. Bush era, when U.S. and Iranian operatives fought a shadow war in Iraq, Sunni-Shiite tensions soared across the region and America’s ally Israel fought a brutal war with Iran’s ally Hezbollah in Lebanon.

Except that now the United States will be facing down a far stronger Iran, one that has taken advantage of the past six years of turmoil in the Arab world to steadily expand its reach and military capabilities.

“In order to confront Iran or push back more fiercely against it, you may find you’re in a conflict far more far-reaching and more destructive to the global economy than many of our allies or American public are willing to bear,” said Nicholas Heras of the Center for a New American Security.

Iran’s alleged quest to produce a nuclear weapon — which Tehran has always denied — has been curbed by the nuclear accord signed in 2015. But in the meantime it has developed missiles capable of hitting U.S. bases and allies across the Middle East and built a network of alliances that have turned it into the most powerful regional player.

Iran now stands at the apex of an arc of influence stretching from Tehran to the Mediterranean, from the borders of NATO to the borders of Israel and along the southern tip of the Arabian Peninsula. It commands the loyalties of tens of thousands in allied militias and proxy armies that are fighting on the front lines in Syria, Iraq and Yemen with armored vehicles, tanks and heavy weapons. They have been joined by thousands of members of the Iranian Revolutionary Guard Corps, Iran’s most prestigious military wing, who have acquired meaningful battlefield experience in the process.

For the first time in its history, the Institute for the Study of War noted in a report last week, Iran has developed the capacity to project conventional military force for hundreds of miles beyond its borders. “This capability, which very few states in the world have, will fundamentally alter the strategic calculus and balance of power within the Middle East,” the institute said.

America’s Sunni Arab allies, who blame the Obama administration’s hesitancy for Iran’s expanded powers, are relishing the prospect of a more confrontational U.S. approach. Any misgivings they may have had about Trump’s anti-Muslim rhetoric have been dwarfed by their enthusiasm for an American president they believe will push back against Iran.

“We are so happy and excited about President Trump,” said Abdullah al-Shamri, a former Saudi Arabian diplomat, speaking from the Saudi capital of Riyadh. “We expect him to deal with the Iranians as the threat that they are, producing missiles and interfering in other countries.”

Exactly what the Trump administration intends to do about a state of affairs that has already become deeply entrenched is unclear, however. So pervasive is Iran’s presence across the region that it is hard to see how any U.S. administration could easily roll it back without destabilizing allies, endangering Americans, undermining the war against the Islamic State and upsetting the new regional balance that emerged during the Obama administration’s retreat, analysts say.

The Trump administration has given no indication that it intends to abrogate the nuclear accord. Rather, U.S. officials say, the goal is to contain activities that lie outside the scope of the accord, such as the ballistic missile program and what one official called the “destabilizing activities” of the Revolutionary Guard Corps and its proxies.

So far, U.S. action has been confined to retaliation for Iran’s test-launch of a ballistic missile last week and an attack by Yemen’s Houthi rebels on a Saudi Arabian navy ship in the Red Sea. The Treasury imposed sanctions Friday against people and companies alleged to be involved in the missile program and the Pentagon dispatched the destroyer USS Cole to the coast of Yemen, suggesting that Iran’s arming of the Houthis may be an early target.

Otherwise, the Trump administration has given little indication of what it has in mind, except to make clear that it intends to be different from Obama.

“Iran is playing with fire — they don’t appreciate how ‘kind’ President Obama was to them. Not me!” Trump wrote in a tweet Friday.

Iran has offered a relatively muted response to the challenge, with Iran’s foreign minister tweeting that Iran is “unmoved” by the threats emanating from Washington. “We’ll never initiate war,” he said.

Iran may well conclude that it is not in its interests to engage in confrontation with a new U.S. administration already earning a reputation for unpredictability, analysts say.

But those familiar with Iran’s behavior in the region have said that they do not believe it will readily surrender its gains.

“Any pushing back, the Iranians won’t take it lying down,” predicted Mowaffak al-Rubaie, a Shiite Iraqi parliamentarian who has, for many years, worked to bridge the divide between Iran and America in Iraq.

“Iraq, Iran and the United States are an extremely finely balanced equation, and Trump shouldn’t come and bash,” he said. “He should play this extremely delicately.”

It is in Iraq, where fighting the Islamic State has most conspicuously brought the United States into a tacit alliance with Iran, that a more hostile relationship between Tehran and Washington could prove most consequential.

Iranian-backed militias are deeply embedded in the overall Iraqi effort to wrest back territory from the militants, one that is also being aided by the United States. In the Mosul offensive, hundreds of U.S. advisers are working alongside Iraqi troops advancing from the east, among about 6,000 U.S. troops currently deployed in Iraq. Thousands of Iranian-backed militia fighters are meanwhile advancing on the city from the west, among a force of tens of thousands that answers mostly, though not exclusively, to Iran.

One of the Iranian-backed groups fighting around Mosul is Kitaeb Hezbollah, which also blew up American troops with roadside bombs and fired mortars into U.S. bases at the height of U.S.-Iranian tensions a decade ago. It will not hesitate to attack U.S. troops should the United States attempt to diminish Iran’s role in Iraq, said Jaffar al-Hussaini, Kitaeb Hezbollah’s spokesman.

“We look at America as our first enemy, the source of all evil on the Earth,” he said. “American interests in Iraq are within our sights and our fire range. If they act foolishly, their interests will be wiped out . . . and we can target their bases whenever we want.”

It is also hard to see how the United States could act to curtail the extensive influence acquired by Iran during the war in Syria. Iran and Russia together have fought to ensure the survival of President Bashar al-Assad’s regime, and they are now pursuing a peace settlement in alliance with Turkey that excludes a role for the United States. America has been left with few friends and little leverage, apart from the Kurds in the northeast of the country.

Russia controls the skies over Syria, and Turkey wields influence over the rebels, but Iran holds sway on the ground, through its extensive network of Shiite militias drawn from Lebanon, Iraq, Afghanistan and Pakistan. They have provided the manpower for front lines from the northern countryside of Aleppo, near the Turkish border, to the Golan Heights bordering Israel in the south.

Trump’s promises to curb Iranian influence are at odds with his stated desire to pursue closer cooperation with Russia in Syria and also to support Assad, because Iran is allied with both Assad and Russia, said Mustafa Alani, a director at the Dubai-based Gulf Research Center.

“He will not be able to contain Iran if he is going to support Assad. He cannot have both at the same time,” he said. The solution, he said, is to topple Assad, because “Assad is the man who is underpinned by Iranian support. He was saved only by Iranian intervention.”

Alani sees no reason Trump should not easily be able to contain Iranian influence.

“It is a myth that Iran is strong. The only reason Iran is strong is because of U.S. weakness,” he said. “Iran is very thinly stretched. It will not take a lot to contain Iran.”

But even those celebrating the shift in American policy don’t seem so sure.

“Tehran today is challenged by a strict, driven, strong and decisive United States, which was not always the case with the lenient and hesitant Obama administration,” said a commentary Saturday in the Pan-Arab Asharq al-Awsat newspaper. “The region now faces turbulent winds of change. It will not be easy.”

Morris reported from Baghdad. Mustafa Salim in Baghdad also contributed to this report.