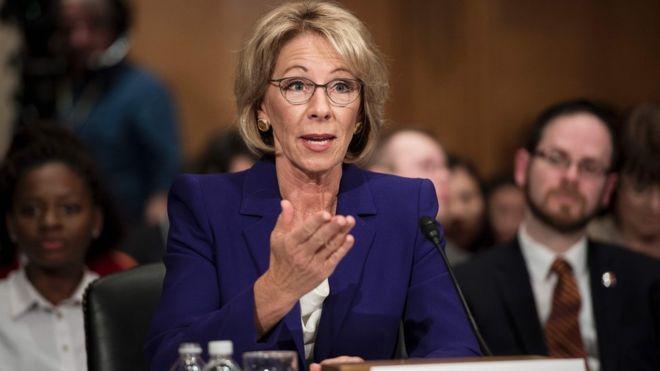 Of all Donald Trump’s cabinet picks, it is perhaps Betsy DeVos – his nominee for education secretary – who has faced the biggest hurdles in being approved for the job.

On being nominated to the post in November, she was called “a brilliant and passionate education advocate” by Mr Trump.

But her performance before a nomination committee last month made the news for all the wrong reasons and she now faces the chance of not landing the job.

It is already as good as certain that Democrats will not vote for Mrs DeVos when they make the decision in the Senate on Tuesday. But two Republican senators have also said they will not back her, leaving the vote tied at 50-50.

If it stays that way, Vice-President Mike Pence would cast the deciding vote – but one more Republican defector would mean Mrs DeVos not getting nominated (last week, the New York Times even went as far as appealing to “one Republican with dignity” to vote against her).

Labour unions, rights groups and teaching organisations have also spoken out against her nomination.

So just why has she proven so unpopular?

Her husband Dick DeVos was a CEO of the beauty and nutrition giant Amway and her brother is Erik Prince, the founder of the controversial private security company Blackwater.

It is not clear how much the DeVos family support Mr Trump or his agenda – in 2015, they gave money towards the campaigns of Jeb Bush and Wisconsin governor Scott Walker. And, in an interview last March, she described Mr Trump as “an interloper” who did not represent the Republican Party.

Much of the controversy around Mrs DeVos focuses on her support of charter schools, which are publicly funded and set up by teachers, parents, or community groups, outside the state school system.

The American Civil Liberties Union (ACLU) said her work in Michigan involved “elevating for-profit schools with no consideration of the severe harm done to traditional public schools” despite “overwhelming evidence” that charter schools were no more successful than their traditional counterparts.

She and her family have also campaigned, albeit unsuccessfully, for a loosening of the oversight of charter schools in Michigan but it is unclear if this is a policy she would pursue further as education secretary.

Less oversight of charter schools, critics say, would allow them to pursue a creationist, evangelical agenda. The New York Times reported that she had told a meeting of Christian philanthropists in 2001 that education reform was a way to “advance God’s kingdom“. Fusion reported that secularists in the US school system faced a “fierce battle” with Mrs DeVos at the helm.

An editorial in the Detroit Free Press in December highlighted concerns in Michigan over her appointment.

“DeVos isn’t an educator, or an education leader,” it read. “She’s not an expert in pedagogy or curriculum or school governance. In fact, she has no relevant credentials or experience for a job setting standards and guiding dollars for the nation’s public schools.

“She is, in essence, a lobbyist – someone who has used her extraordinary wealth to influence the conversation about education reform, and to bend that conversation to her ideological convictions despite the dearth of evidence supporting them.”

One of the two Republican senators who said they could not support Mrs DeVos, Susan Collins of Maine, said she was “concerned that Mrs DeVos’ lack of experience with public schools will make it difficult for her to fully understand, identify and assist” challenges facing rural schools in particular.

The concerns over her qualifications rose to the fore last month after a performance at her confirmation hearing that our reporter gave a polite C minus.

In perhaps the most uncomfortable moment, she struggled to show she was familiar with the Individuals With Disabilities in Education Act (Idea), a federal law that requires public schools to make accommodations for disabled students.

The American Association of People with Disabilities said it was “very concerned” that she seemed “unfamiliar with the Idea and the protections it provides to students with disabilities”.

It was not the most striking moment of the session though – that was when Mrs DeVos, discussing whether to allow firearms in schools, noted that Wyoming classrooms might need guns to defend against bears.