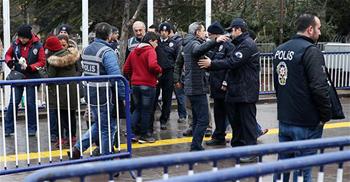 An Ankara court has arrested the wife of an Islamic State of Iraq and the Levant (ISIL) suicide bomber in the hearing of the case into the jihadist organization’s twin bomb attack in the Turkish capital on Oct. 10, 2015, which killed over 100 people and wounded many others.

Esin Altıntuğ, the wife of ISIL suicide bomber Halil İbrahim Durgun who brought the militants that carried out the attack targeting the peace rally in Ankara, was arrested after testifying in court on Feb. 6.

Durgun, who was among the organizers of the Ankara attack, blew himself up during a police operation in the southeastern province of Gaziantep in order not to get caught. Altıntuğ was tried without arrest until the hearing at the Ankara Fourth Heavy Penal Court, in which 36 suspects, of whom 19 are under arrest, are being tried.

Claiming that she did not know her husband was a member of the jihadist group, Altıntuğ said Durgun was “not like this and he was into nightlife” when the couple first got married. She added that her husband had changed within a year of getting married and asked her to cover herself.

During her testimony Altıntuğ said her husband had gone to Egypt for three months, claiming he was going there for “education purposes.” According to Altıntuğ, the other suspects being tried in the case – Resul Demir, Halil Alçay and Yakup Karaoğlu – had visited their house, but she never saw them due to the rule that women and men had to sit separately.

Altıntuğ said Durgun had told her that he was going to Istanbul but actually went to Gaziantep two days before he said he would leave.

“He arrived in the house, took a shower, and then told me that he was going outside the city. He left again. The day was Monday and I called him to find out where he was. He told me that he was coming home at night. We went to a shopping mall and bought clothes that were not his usual style. He was very calm. The next day he ran away and called me at around 1 or 2 a.m. that night to say, ‘I’m leaving the city so you won’t be able to reach me. I’ll call you.’ Later, the police arrived. We found out about the attack from the media and we couldn’t believe it,” she added.

Saying she later met another ISIL militant Metin Akaltın and stayed in the house with his wife Hatice Akaltın, Altıntuğ said Durgun arrived later in the day.

“I asked him if he had carried out the attack. He said, ‘You only know what you’re supposed to know. Don’t get involved. They are preparing an ID and passport ready for me,’” she said.

During the police operation in which Durgun blew himself up, Altıntuğ said she begged unsuccessfully for her husband to surrender himself. She added that she heard the explosion while in another room.

The court ruled in favor of Altıntuğ’s arrest due to the suspect having the possibility of escaping.