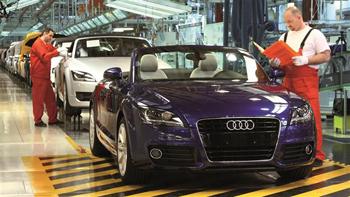 Figures released by the federal statistics office Destatis showed that production had slid by 3.0 percent in the final month of 2016.

Almost every area surveyed by Destatis showed production falling in December, with industry down 3.4 percent, construction down 1.7 percent and energy down 0.9 percent, AFP reported.

“Across the whole fourth quarter, production remained almost unchanged, at -0.1 percent compared with the third quarter,” the Economy Ministry in Berlin commented in a statement.

The announcement could cloud an otherwise bright picture painted by economic indicators in Germany.

Tuesday’s data were “a good reminder that German industry is far off earlier strength,” ING Diba bank analyst Carsten Brzeski told AFP, although “cold winter weather and the Christmas season should be the main reasons for the sharp fall.”

Looking ahead, manufacturing could be boosted by increased orders in the coming months but cold weather will continue to weigh on construction, Brzeski added.

German investor and consumer confidence surveys were robust in January, but businesses report fears for the future as the world enters a period of political uncertainty over elections across Europe, Brexit, and Donald Trump in the White House.

“Uncertainty in and about two of Germany’s most important trading partners, the US and the UK, should put a cap on any upward potential,” Brzeski further told AFP.