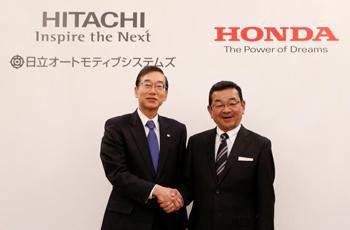 Automakers are increasingly teaming up with parts suppliers to develop and produce components for the fast-growing EV segment as a way to boost scale while containing high costs.

“With environmental conservation measures and regulations increasing on a global scale, the market for electric vehicles is expected to continue to grow,” the companies said in a joint press release.

Honda’s latest tie-up highlights its willingness to join with other industry players to develop more lower-emission cars, and comes after its announcement last week that it was teaming up with General Motors Co to produce hydrogen fuel cell power systems in the United States from around 2020.

The Honda-Hitachi venture will have sales and manufacturing functions in the United States and China in addition to Japan, the companies said.

It will be established in July with an investment of 5 billion yen ($44.69 million), and will be 51 percent by Hitachi Automotive Systems owned and 49 percent by Honda, they said.