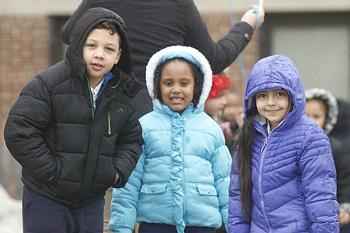 Lawrence is seen as a model, both for academic results and the inclusive and pragmatic way it got beyond ideology to get traditional public schools, charters, nonprofits, and families to work together.

FEBRUARY 6, 2017  LAWRENCE, MASS.—Brandon Difo, at times choking back tears, can remember clearly the moment that “woke me up.”

It was an event that most people believed would end the high school aspirations of a kid who had already dropped out of high school three times. But the call Mr. Difo got while watching some of his friends graduate back in 2013 did the opposite.

His girlfriend was at the hospital giving birth to his son.

“When I saw my son being born, it’s like the only thing I could think about is that one day when he grew up, there was no way I could look at him and tell him to go to school if I didn’t,” says Difo.

Now, to his own disbelief, he’s on track to walk the stage at his high school graduation later this year.

In many ways, his “very bumpy” journey in getting to graduation echoes the story of the school district that educated him. Like Difo, Lawrence had its own moment of reckoning. In 2011, it was the first to be placed in receivership in Massachusetts history. A year later, the former mill town, was dubbed “City of the Damned” by Boston Magazine for its soaring crime rate and “failing schools.”

But today, Lawrence is home to one of the most remarkable turnaround stories in the country, thanks in no small part to a program that got high school dropouts like Difo reengaged.

Now in its sixth year, that turnaround approach is seen by some as a first of its kind – both for its academic results and, education experts say, for the inclusive and pragmatic way it got traditional public schools, charters, nonprofits, and families to work together. During that time, Lawrence – once the third-worst ranked district in the state – has climbed out of the bottom 10 percent.

“When you look at the annals of state intervention in local school districts across the country … there’s virtually no track record, nor extant examples of states effectively turning around academic performance in local school districts until Lawrence arrived on the scene,” says Paul Reville, a professor of education at Harvard University’s Graduate School of Education.

Professor Reville is the former Massachusetts education secretary who drafted the act aimed at turning around Lawrence. It gave broad powers to the district’s new administrator, Jeff Riley, who used them to develop a “hybrid” model that “brought in all sorts of providers, charter providers, community-based organizations to help in the work,” Reville says.

Mr. Riley and other Lawrence educators are the first to acknowledge their students still have a long way to go academically. But for a district whose student body is more than 90 percent Latino – 70 percent of whom don’t speak English as their first language, and nearly two-thirds of whom are economically disadvantaged – the results are noteworthy. The graduation rate between 2011 and 2015 grew from about 52 percent to 72 percent and the dropout rate was cut roughly in half.

To generate that academic success, Riley was forced to makes some tough calls. In 2011, Lawrence was in the bottom 1 percent for math and English statewide. To help channel money back to the classrooms, he slashed central office staff by one-third and fired half the district’s principals. Ninety percent of teachers kept their jobs.

Riley says he tried to avoid a “scorched earth” approach so as not to irreparably alienate any groups. “I tried to tell people at the beginning that my intention was to do this receivership ‘with people’ not ‘to people,’ ”says Riley, a veteran urban educator from Boston. “We weren’t interested in being seen as being some occupying force, and in fact, what we wanted to do was bring back people in the community.”

To that end, Riley enacted a host of educational initiatives:

‘We only care about the kids’

Perhaps nothing embodies the Lawrence approach more than the spirit of cooperation – instead of competition – fostered between charter school operators and the wider district.

Riley says his all-hands-on-deck approach is about putting the students’ needs first. As of 2015, 51 percent of American public school children qualified for free or reduced priced lunch, he notes, quoting a Southern Education Foundation report. To him, students in the struggling Lawrence district couldn’t afford to get caught in the “laughable … civil war that’s developing between traditional schools and charter schools.” Instead, he says he saw the need for an approach in the “radical center,” requiring unions and charters to make compromises to do whatever would most quickly and effectively lift up the most students.

“We said, ‘We don’t really care about the different names of the organizations … we only care about the kids in Lawrence,’ ” says Riley, adding that “Nobody’s claiming victory here … [but] the preliminary results have been good.”

One of the organizations that answered his call was The Community Group.

“I agree with idea of good schools, it doesn’t matter what type of schools,” says Brent Merton, the executive deputy director of operations for the nonprofit, which operates charter schools and early education services and has roots in Lawrence that stretch back to the 1970s.

The Community Group runs three charters in Lawrence, but also agreed to Riley’s request to takeover the Arlington Elementary School, a K-4 public school that, at the time of the receivership, was ranked a Level 4 turnaround school by the state. (At Level 5, schools are often shut down.) It agreed to certain conditions in return for broad autonomy: The school would maintain its status as a traditional public school, would hire union teachers, and would take in any kids from the surrounding neighborhood rather than using the lottery system common to charter schools.

Under The Community Group, the Arlington has gone from Level 4 to Level 1 status. Districtwide, Lawrence went from having three Level 1 or Level 2 schools in 2012 to 12 in 2016.

Mr. Merton says the Lawrence turnaround has also led to two-way sharing between his charter organization and traditional public schools in the district. The Community Group shared its way of assessing students with the principal of the Guilmette Elementary School. In turn, her school shared its approach to English language learning with Merton’s organization.

“I really believe that sharing of ideas has gone both ways. It wasn’t us going to them and saying, ‘This is how you do certain things,’ ” Merton says.

For Ann Constantino, the principal for the (K-5) Leahy school, the most notable change has been the autonomy Riley handed back to the schools.

“As a result of the turnaround plan, each school gets to run itself,” says Ms. Constantino, who has worked at Leahy for 36 years. “Of course, there is still guidance from central office, but they really think we are able to think about what we need and with teacher input [and] leadership from counselors to teachers to parents, those are the people that help me to make the decisions that are going to be best for this school.”

This has meant she has been able to reinstate the school’s music program, which was axed about 15 years ago, a common occurrence in low-income, underperforming districts. Another teacher, Colleen Paris, says this has meant her 2nd graders’ class on fairy tales is now taught in tandem with New York’s Metropolitan Opera.

Judy Higgins, the 5th-grade science teacher at the Leahy says the KnowAtom science curriculum is better than the one she taught until recently in an upper middle-class district in Seattle.

A key part of the turnaround was getting parents to buy in. At the time Riley took over the district, he says, the word on the street was that parents didn’t care about their kids’ education.

“Nothing could have been further from the truth,” recalls Riley. “The truth was … many schools weren’t letting parents into the process and a lot of principals were like, ‘Give us your kid at eight in the morning, you stay there, we’ll give them back to you at three. Don’t cross

Teachers interviewed were happy to tout the successes of their students, but they stress that the challenges of teaching in Lawrence must not be sugarcoated. Student gains, they say, are all the more remarkable given the serious poverty many of them face.

One veteran teacher, Jane Roth, says she’s never seen so many students displaced by house fires as in Lawrence. She adds that some come to school tired because rats crawl across their beds at night keeping them awake. Others come to school hungry, so the school feeds them breakfast and lunch year around, and many teachers keep snacks in their classrooms. Many have parents who work shifts around the clock to make ends meet, meaning they rarely get to spend time together.

Still, the turnaround in Lawrence seems to be inspiring in alumni a renewed sense pride and commitment to the district.

High school guidance counselor Juana Espinosa’s daughter, a recent Lawrence graduate who has been accepted by Northeastern University in Boston to study school psychology, plans to return with her degree to give back to the district.

Others with similar stories are part of Lawrence’s growing cohort of Hispanic staff, which climbed from 330 in 2011 to 460 in 2015.

“I know a lot of people working in different areas and different schools, even at central office that … grew up in Lawrence, and have left to go to college and … come back [to] work for the district,” says Ms. Espinosa, an immigrant from the Dominican Republic. “That is critical because you’re giving back what Lawrence has given you.”

Conspiracy epidemic, born in US, spreads in Europe