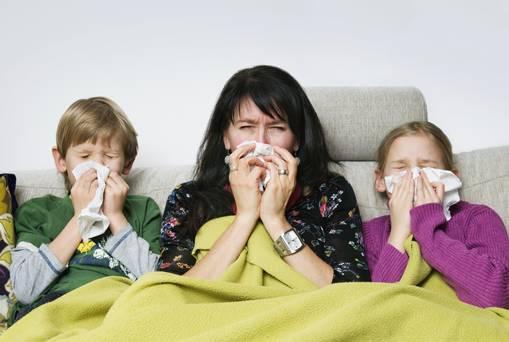 If there’s one thing you can guarantee about a child, it’s that they’ll catch some — if not all — of the bugs going round their school or nursery.

And what’s almost as certain is that someone else in the family — usually mum — will then catch it too.

New research shows the average mum will fall ill 324 times over their offspring’s childhood — with colds and bugs passed on to them by their child. An endless cycle of sore throats, runny noses and sickness means the average mum will feel under the weather 18 times a year, suffering from a total of 54 colds, 108 sore throats or runny noses, 36 sickness bugs and an annual bout of flu.

The majority — 80pc of parents polled by the supplements firm Healthspan — say the bugs can usually be traced back to their children. According to experts, spending so much time with their children, it’s inevitable that parents are at higher risk of picking up any illnesses their child has, particularly viral infections such as colds that children inevitably catch from their friends and classmates.

However, ensuring good hygiene practices will reduce the chance of infections passing around the entire family. Many minor ailments can be treated quickly with over-the-counter remedies or with the advice of a pharmacist, but if an illness persists or worsens, patients should contact their GP for further advice.

The study found 68pc of mums had been more prone to falling ill since having children, with 39pc saying they now constantly feel under the weather. But part of the sickness cycle could be that mums are so busy looking after their children that they forget to look after themselves.

GP Dr Sarah Brewer, Healthspan’s medical director, says: “Mums are often on the front line when it comes to the family’s illnesses and, due to time pressures and putting others first, are often poor at looking after themselves.

“Prevention is key and it’s important for mums to look after themselves.”

The study also found that 70pc of mums say they’ve fallen ill while away on holiday or off work.

“Stress has a negative effect on immunity, especially when you start to relax at the end of a stressful period,” says Brewer.

This is known as the ‘let-down effect’, she says, explaining that getting sick at the end of a period of stress is linked with a drop in levels of the stress hormone cortisol.

“The body switches from the ‘fight-or-flight’ reaction to a ‘rest-and-digest’ response and the high level of immune vigilence is relaxed,” she says. “This is why you experience a flare-up of existing conditions such as migraine or cold sores, and increased susceptibility to cold viruses.”

Women tend to soldier on when they’re ill, and 84pc of mums feel they’re unable to relax when ill, compared to seven in 10 dads. And 72pc of women reckon they cope better than their partner when they’re ill.

Psychologist Dr Meg Arroll says this pattern may be related to our innate drive to do everything we can to ensure our offspring’s survival.

“In our ancestors’ time, men would have needed to be fit and well to ‘fight-or-flight’ in face of a threat,” she explains. “But women, having different roles, safeguarded their family.

“We haven’t changed that much, and so even now with differing gender roles, women’s protective instincts kick in — they care for others over themselves, whereas men maintain their own physical fitness in order to protect and provide for their families.”