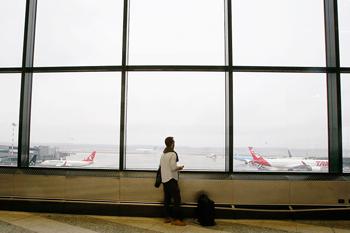 The rollout of President Trump’s travel ban led to no small amount of chaos and confusion. But the system has stood firm so far.

FEBRUARY 6, 2017 —For a week, chaos reigned. Protesters massed outside airports, lawyers filed lawsuits across the country late into the night, and thousands of immigrants to the United States were thrown into legal limbo by President Trump’s executive order.

There was confusion and claims by some that the administration appeared to ignore judicial orders.

Then, something normal happened.

Although Mr. Trump has continued to criticize the decision, the Department of Homeland Security has stopped enforcing the order, the State Department is allowing those with valid visas to enter the country (after saying it previously revoked as many as 100,000), and the Justice Department is arguing its case through the courts, where Vice President Mike Pence has said he is “very confident that we’re going to prevail.”

On one hand, a president who vowed to shake up Washington has clearly done just that – and more. But viewed another way, this past week has simply been a new test of America’s centuries-old checks and balances – with a new president testing the limits of executive power and the courts pressing the pause button, at least for now.

“What we’re seeing is a salutary operation of checks and balances,” says Ernest Young, a constitutional law professor at Duke University School of Law.

“A lot of presidents come into office with a very broad view of what they’re going to be able to do,” he adds. “It’s not that uncommon [to be blocked by the courts], but that’s how the system is supposed to work.”

But Trump’s order has added new layers of confusion, some say. Not only was the order broad – suspending the entry of people from seven majority-Muslim countries for 90 days, the admissions of any refugees for 120 days, and the admission of refugees from Syria indefinitely – but it was crafted and implemented poorly, they say.

That seemed to create only more confusion.

Now, many of those detainees have been released, and what may have appeared to some to be the administration flouting judicial orders instead might simply have been confusion and misinformation, says Professor Young.

“If that sort of behavior continued, that would be a real problem,” he adds. Then, “if they refused to comply with court orders [beyond] that point we would have a constitutional crisis.”

There has not been much evidence of that, says Lee Gelernt, a lawyer at the ACLU national office who argued one of the first cases challenging the executive order. There have been some isolated cases of people not being allowed to board flights to the US over the past week, but they were all eventually able to get on flights.

The legal path ahead

Civil rights groups are still monitoring the situation and how it was first handled, Mr. Gelernt says. A lawsuit filed in district court in Philadelphia, for example, claims that CBP officers told two Syrian-born men with valid visas they had to either leave the US on the flight they had arrived on or be arrested and have their visas taken away. Other immigrants claim in legal briefs to having been forced by border officials to sign documents waiving their right to enter the United States.

“Exactly what is happening on the ground remains unclear,” says Gelernt. “If we hear about noncompliance we’re prepared to go to court immediately.”

The case is expected to develop further Monday night. Minnesota and Washington State are challenging the immigration order’s constitutionality, and the consolidated case is now in a federal appeals court in San Francisco. The Justice Department has until 6 p.m. Pacific Time Monday to respond to the decision by a federal appeals court in San Francisco this past weekend to not reinstate the travel ban.

The role of the judiciary, he wrote, “is limited to ensuring that the actions taken by the other two branches [of government] comport with our country’s laws, and more importantly, our Constitution.”

“The circumstances brought before [the court] today are such that it must intervene to fulfill its constitutional role in our tripart government,” he continued.

Justice Department lawyers countered that the injunction “contravenes the constitutional separation of powers … and second-guesses the President’s national security judgment.”

However the courts ultimately rule, recent days have sent a message, says Gelernt.

“One thing we’ve learned over past 10 days is that the courts will not be cowed into simply rubber stamping administration policies.”