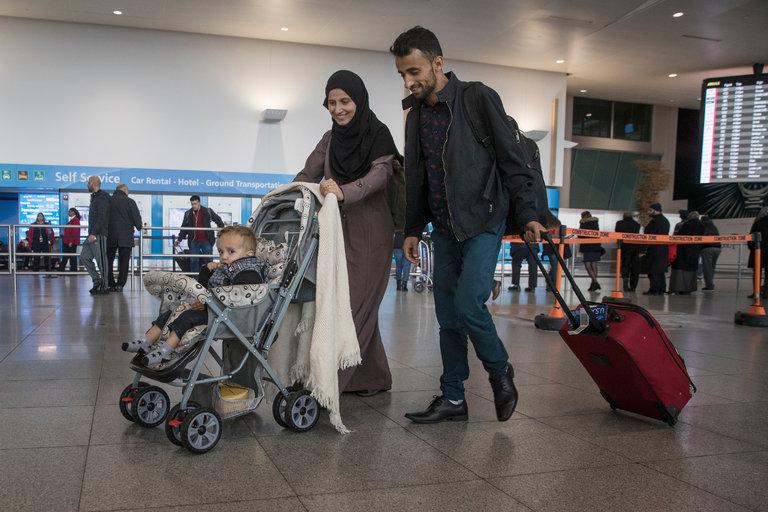 The administration’s brief was the last in a series of urgent pleas to the United States Court of Appeals for the Ninth Circuit, in San Francisco, which is now set to rule on the most ambitious and disruptive initiative of Mr. Trump’s young presidency. The ruling will almost certainly be followed by an appeal to the Supreme Court.

The court scheduled an hourlong oral argument for Tuesday. That gives at least another day of reprieve to foreign visitors from seven predominantly Muslim countries, as well as other immigrants, who initially were blocked from entering the United States by Mr. Trump’s order.

The administration’s brief largely tracked its earlier arguments that dismissing the ban outright would threaten national security and disregard presidential authority. But it also asked the appeals court, at a minimum, to reinstate at least part of Mr. Trump’s order — appearing to acknowledge the possibility that the government’s case might not be successful.

The “ban” was not a response to any demonstrable danger to Americans. It is essentially a stunt designed to demonstrate that Trump is…

“At most,” the brief said, the court order blocking the ban should be limited to “previously admitted aliens who are temporarily abroad now or who wish to travel and return to the United States in the future.” That would allow the federal government to block people who have never visited the United States.

On Monday, Sean Spicer, the White House press secretary, said the administration stood ready to reinstate the entire ban. “Once we win the case, it will go right back into action,” he said.

Trial judges around the country have blocked aspects of Mr. Trump’s executive order, which suspended travel from the seven countries and limited the nation’s refugee program, but none of those cases have reached an appeals court. And none of the lower-court rulings were as broad as the one under review in the case, State of Washington v. Trump.

The Ninth Circuit scheduled the oral argument in the case for Tuesday at 3 p.m. Pacific time. It is to take place by telephone, and the court said it would be live-streamed on its website. Holding an oral argument by telephone in a major case is unusual.

At issue is the earlier ruling, by Judge James L. Robart, a federal judge in Seattle, that blocked the key parts of Mr. Trump’s executive order. Judge Robart’s ruling allowed immigrants and travelers who had been barred from entry to come to the United States, and it inspired a harsh attack from Mr. Trump, who accused the judge of endangering national security.

On Saturday, the administration asked the Ninth Circuit for an immediate administrative stay of Judge Robart’s ruling without hearing from the plaintiffs, the States of Washington and Minnesota. The court declined, instead asking for more briefs.

Opponents of Mr. Trump’s targeted travel ban made three kinds of arguments in their submissions to the appeals court, saying that the ban is unlawful, that it represents bad national-security policy, and that it is a threat to the nation’s economy.

Fifteen states and the District of Columbia — including New York, California, Massachusetts and Virginia — filed a supporting brief to argue that allowing the ban to stand would “cause harm to the states, including to state institutions such as public universities, to the businesses that sustain our economies, and to our residents.”

In a brief filed Saturday, the Trump administration argued that Judge Robart’s order would cause irreparable harm to national security.

In response, lawyers for Washington and Minnesota said that was not plausible, because it would mean the nation had long been suffering “some unspecified, ongoing irreparable harm.”

“That makes no sense,” the brief said. “As this court has held, preserving the status quo against sudden disruption is often in the interest of all parties.”

On Monday, the Trump administration responded that the states were asking the courts “to take the extraordinary step of second-guessing a formal national-security judgment made by the president himself pursuant to broad grants of statutory authority.”

In its earlier brief, the Trump administration urged the Ninth Circuit to reject arguments based on religious discrimination, even though Mr. Trump has said he meant to favor Christian refugees. Judicial consideration of the president’s motives, the administration’s brief said, would violate the separation of powers.

The states responded that “courts have both the right and the duty to examine defendants’ true motives.”

Questions about permanent residents are not moot, the states’ brief said, as the administration could again change positions.

“And apart from all of these concerns,” the former officials said, “the order offends our nation’s laws and values.”

The third front in the legal battle against Mr. Trump’s order was opened by the technology industry and other businesses.

Almost 100 companies, including Apple, Facebook and Google, urged the Ninth Circuit to continue to block the order, saying it “harms the competitiveness of U.S. companies.”

The “instability and uncertainty” created by the order, the brief said, “will make it far more difficult and expensive for U.S. companies to hire some of the world’s best talent — and impede them from competing in the global marketplace.”