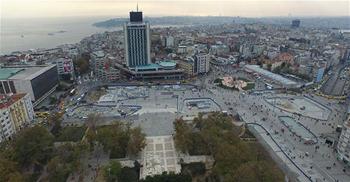 Istanbul’s cultural protection board on Jan. 6 approved a plan to construct a mosque in the city’s main Taksim Square.

The controversial plan has been in the works for decades and was previously objected to as it was ruled to be against public benefit.

The mosque planned to be built in the square is designed on a 1,482 square-meter area and carries the signatures of two architects. Its height, excluding its minaret, will be around 30 meters, the same as the two historical churches in the area.

The complex will also have a conference hall, while its underground area will be used as a covered parking space with a 180-vehicle capacity.

The plot where the mosque is planned is currently held by the General Directorate of Foundations.

As part of the plan, the next move will be to relocate the shops currently operating in the field envisaged for the mosque’s construction, and later the Beyoğlu Municipality will be included in the process for the licensing of the mosque.

The plan has a contentious history going back decades. In 1983 a similar project was suggested but the Council of State ruled that constructing mosques, bazaars and parking garages on Taksim Square would be against public benefit.

Subsequent years saw various plans and designs put forward for a mosque in Taksim. In July 2015 the Council of State reversed its judgement canceling various construction plans in Istanbul’s Beyoğlu district, paving the way to a number of projects including the mosque.