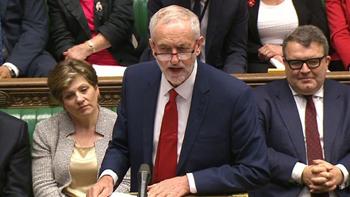 British MPs from across the political divide, including Labour leader Jeremy Corbyn, have expressed their support for House of Commons Speaker John Bercow after he spoke out against US President Donald Trump addressing Parliament during a state visit planned for later this year.

In an extraordinary move on Monday, Bercow said he would not be inviting the US president to speak to Britain’s lower house of parliament because of Trump’s executive order that blocks the entry of citizens from seven Muslim countries and his other controversial policies.

Lawmakers from across the House applauded Bercow’s unprecedented statement.

‘Trump’s state visit should not go ahead’

“Well said John Bercow. We must stand up for our country’s values. Trump’s State Visit should not go ahead,” Corbyn tweeted.

Labour MP Rosena Allin-Khan described it as a “bold and brave move.” She replaced London Mayor Sadiq Khan in his Tooting seat.

“This is the right decision by the Speaker,” Liberal Democrat leader Tim Farron said.

‘May kowtowing to nasty misogynist’

“The Prime Minister might wish to kowtow to the nasty misogynist that now sits in the Oval Office but no-one else does. We do not want him to speak to us. He is not welcome,” he added.

Tasmina Ahmed-Sheikh of the Scottish National Party said Bercow had demonstrated “much needed leadership, where the UK Government has been so woefully lacking.”

Despite all this, a spokesperson of Prime Minister Theresa May issued a statement, saying, “We look forward to welcoming the President to the UK later this year. The dates and arrangements for the state visit will be worked out in due course.”

More than 1.8 million people in Britain have signed a petition calling on the government to cancel or downgrade Trump’s planned visit to London and meet Queen Elizabeth.

The petition to halt Trump’s visit was started in November, months before May visited the White House. During her visit January 27, May extended the invitation for a state visit to Trump.

The campaign gained momentum after the new Republican president imposed a 90-day entry ban on citizens from seven Muslim-majority countries.

The exact date for Trump’s visit has not been announced yet, but according to the Foreign Office, it is scheduled for the second half of the year.