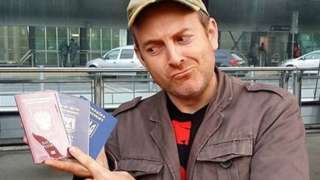 A popular travel blogger known more for his wry observations than his political views has ended up in jail – and at the centre of a geopolitical row – after visiting a disputed territory and thumbing his nose at the authorities.

Alexander Lapshin writes the blog “Life Adventures”, where he details his transport woes, his visits to odd and unusual sites, and his thoughts on the beauty of local women.

His popular posts hosted on the website LiveJournal feature international politics considerably less often. But his latest trip has landed the 40-year-old Lapshin in a Belarusian jail, and politicians from four countries – including the Russian foreign minister and the President of Belarus – have weighed in on his case.

At issue are Lapshin’s repeated visits to the disputed territory of Nagorno-Karabakh. It’s internationally recognised as part of Azerbaijan and is totally surrounded by other Azeri territory. However it’s almost entirely populated by ethnic Armenians and has been a consistent cause of Armenian-Azeri tensions.

A series of bloody conflicts over Nagorno-Karabakh flared up after the breakup of the Soviet Union, and while an official ceasefire has been in place since 1994, this has been consistently violated, including an outbreak of hostilities in 2016.

Lapshin’s involvement began when he visited Nagorno-Karabakh in 2011 and 2012 and subsequently wrote about those visits in his blog. Azeri prosecutors accuse him of entering the territory illegally and as a result he was banned from visiting Azerbaijan.

Despite this he travelled to Azerbaijan in 2016, this time using a different passport. He holds Russian, Israeli and Ukrainian travel documents, and his Ukrainian passport has a slightly different spelling of his name, which apparently allowed him to bypass the ban.

Azeri authorities also say that Lapshin has called for the region’s independence in his blog posts – a claim that is difficult to verify because many of the relevant posts were deleted following his arrest. Under Azeri law, calling for changes to the “territorial integrity” of the country is illegal.

Azerbaijan issued an arrest warrant for Lapshin due to his travels and blog posts, and he was arrested in mid-December while on a visit to Minsk. The Azeri government then asked for Lapshin to be extradited from Belarus to stand trial, and he faces up to 13 years in jail if convicted on all the charges against him.

Although most of Lapshin’s original posts discussing Nagorno-Karabakh have now been deleted, one repost of an entry he wrote in April 2016 still exists on another blog.

In it, he declared himself neutral in the dispute between Armenia and Azerbaijan but was critical of the Azeri government and media. “Reading their media gives the impression that the Azerbaijani authorities and journalists believe their own people to be morons,” he wrote. “The Azerbaijani army is incapable of storming Karabakh for both strategic and political reasons. If they could do it – they would have done so a long time ago, as 23 years is enough time.”

Russia and Israel have weighed in on the issue, calling on Lapshin to be released.

At a press conference in January, Russian Foreign Minister Sergei Lavrov said: “Russia is opposed to the criminalization of visits by journalists or other people to this territory or other territories in different regions. Moscow disagrees with the extradition to a third country of Russians detained abroad.”

Nevertheless, the extradition request has continued to wind its way through the Belarusian courts, and Lapshin remains in jail in Minsk.

Belarusian President Alexander Lukashenko has told law enforcement agencies that they should honour the request. At a press conference on Friday he told reporters: “He [Lapshin] was detained in accordance with an Interpol decision, and according to the law we have to pass him to Azerbaijan.”

He added: “Of course we could release him, but it would be wrong.”

Israeli MP Ksenia Svetlova has also been working for the blogger’s release. She persuaded Lapshin to write a letter of apology to the Azeri authorities, who were unmoved.

“They [Lapshin’s family] are waiting for some kind of response from the Azeris,” Svetlova told BBC Trending.

Svetlova has also asked for guarantees that, in the event of extradition, Lapshin is immediately released if he is extradited to Azerbaijan.

In the meantime, Lapshin’s wife Ekaterina has taken over his blog and Facebook account. Ekaterina Lapshin says that she was allowed a one-hour visit in December but has since been denied access to her husband.

She recently wrote on Facebook: “Apparently I won’t [be allowed a visit]. 15 days have passed since my request was made and I am not allowed. This is what the prosecutor told me.”

She’s also used Facebook to express concerns about the standard of the prison that Lapshin is being kept in.

“It’s seriously cold… -29 to – 30 in Minsk yesterday,” she wrote in January. “This is especially felt in the cell where (Alexander) is held.”

Lapshin also has the backing of his fans and many others organising on Russian language social media. On VKontakte, a a change.org petition titled “Freedom of Journalist Alexander Lapshin” has been circulating. And the Armenian National Committee, an organisation of Armenian-Americans, has organised protests outside Belarusian consulates in New York and Washington.

Lapshin is now awaiting a final decision from the Supreme Court of Belarus in the next few days. If his latest appeal is rejected, it will almost certainly mean extradition to Azerbaijan.