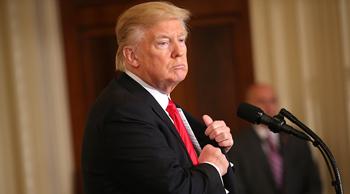 John Bercow, the House of Commons Speaker, has voiced strong opposition to US President Donald Trump addressing the Houses of Parliament during his state visit to the UK because he said “opposition to racism and sexism” are “hugely important considerations”

In a forceful statement, Bercow told MPs that being invited to address parliament was “not an automatic right” but “an earned honor.”

“Before the imposition of the migrant ban I would myself have been strongly opposed to an address by President Trump in Westminster Hall,” Bercow told his fellow MPs.

“We value our relationship with the United States. If a state visit takes place, that is way beyond and above the pay grade of the Speaker.

“However, as far as this place [the House of Commons] is concerned I feel very strongly that our opposition to racism and to sexism and our support for equality before the law and an independent judiciary are hugely important considerations in the House of Commons.”

Whether Trump should address the UK parliament has been a source of heated debate. Bercow said he was one of the three “keyholders” to Westminster Hall and he will not permit an invitation to the parliament to be made in his name.

The statement comes following Prime Minister Theresa May’s invitation to Trump to make a state visit to the UK. May revealed that Trump will visit Britain before the end of the year.

Several politicians, including Labour Party leader Jeremy Corbyn, have said that the visit should be canceled until Trump repeals his executive order which bans people from seven majority Muslim nations from travelling to the US. Some 40,000 people marched in London against the so-called “Muslim ban” and 1.8 million people have signed an online petition objecting to the visit.

Bercow was a Conservative MP before taking up the impartial speaker role which he has held since 2009. His words were met with a chorus of spontaneous applause from around the chamber. Speaking after Bercow’s statement, stalwart Labour MP Dennis Skinner said: “Further to that point of order, two words: Well done.” Corbyn also took to Twitter to commend Bercow.

Trump himself is reportedly not interested in speaking in parliament and instead wants to focus on the pomp and ceremony the visit will entail. The Guardian cite government officials in saying that Trump has expressed no interest in speaking at Westminster. However, it’s understood that he is attracted to “high visibility visits with key members of the Royal Family.”

Bercow’s statement was “embarrassing” for both the UK and the US, but Theresa May will ultimately find her way out of the scandal behind the scenes, Adam Garrie, author at The Duran, told RT.

He believes that May’s tactics will be to “let events take care of themselves, let the issue die down in parliament,” before effectively inviting Trump to speak to select members of the parliament.

“He may be invited to speak to a group of parliamentarians… that want to hear him, and it will be a formal invite to parliament in all but name,” Garrie predicted.

“We haven’t seen a Speaker of the House of Commons act as though he had so much power since the English Civil War,” said Garrie, saying that Bercow’s comments were divisive but “won’t generally change trajectory of Trump’s British visit.”