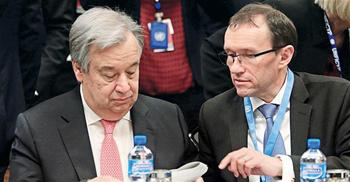 Turkey will host the United Nations’ new secretary-general, Antonio Guterres, and his special envoy on Cyprus this week to discuss ongoing efforts to resolve the decades-old divide on the eastern Mediterranean island and review the refugee problem stemming from Syria’s civil war.

According to Turkish officials, Guterres is expected to hold talks with President Recep Tayyip Erdoğan and Prime Minister Binali Yıldırım on Feb. 10 in Ankara. A former high commissioner for refugees, Guterres began his job as U.N. chief on Jan. 1. Special envoy for Cyprus Espen Barth Eide is expected to be in Ankara this week as well, officials said, although it is not clear whether or not Eide will accompany Guterres in Ankara.

The top issue to be discussed in Ankara is expected to be the ongoing U.N.-led talks aimed at resolving the Cyprus problem on the basis of a bi-zonal and bi-communal formula. Turkey, Greece and the United Kingdom met with Turkish and Greek Cypriots in mid-January, with expectations that a five-way conference will be organized in early March upon the request of the two negotiating parties.

Guterres and Eide will listen to the Turkish perspective with regard to the ongoing talks on the eve of the upcoming conference.

Guterres will also discuss refugee problems stemming from Syria with Turkey, which is home to around 3 million Syrians and Iraqis on its soil. Officials will discuss developments in Syria and preparations for a fresh round of political talks between the Syrian government and the opposition before a Geneva meeting slated for Feb. 20