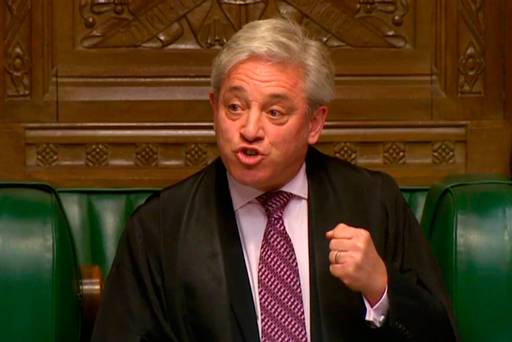 The British Speaker of the House of Commons was applauded yesterday as he said he “strongly opposed” Donald Trump addressing the parliament during the US president’s forthcoming state visit.

John Bercow’s extraordinary intervention prompted sustained applause from some MPs, but also drew criticism that he was breaching the strict political impartiality rules regarding his role.

Mr Bercow said he was “strongly opposed” to the idea of an address to both houses of parliament by Mr Trump before the US president imposed a travel ban on Muslims and refugees, and was now “even more strongly” against such a move.

The sharp comments saw Downing Street re-affirm its backing for the visit, stating: “We look forward to welcoming the president to the UK later this year. The dates and arrangements for the state visit will be worked out in due course.”

Number 10 has insisted it is too early in the process to say if Mr Trump would be offered the honour of addressing MPs and peers in Westminster.

Opposition to Mr Trump’s visit has grown in recent weeks with critics calling for the trip to be downgraded.

He was invited to make a state visit to Britain after meeting Theresa May in Washington last month.

A petition to withdraw the invitation will be debated by MPs on February 20 after attracting 1.8 million signatures.

Former Ukip leader Nigel Farage, who is a close friend of Mr Trump, insisted the Speaker must remain above politics.

“For Speaker Bercow to uphold our finest parliamentary traditions, he should be neutral,” he tweeted.

But in pointed remarks, Mr Bercow said addressing parliament was “not an automatic right, it is an earned honour” for foreign leaders.

Mr Bercow added that parliament’s opposition to racism and sexism as well as its support for the law were “hugely important considerations”.

Responding to a point of order raised in the Commons by Labour MP Stephen Doughty, he said: “I must say to you, to all who signed your early day motion and to others with strong views about this matter on either side of the argument, that before the imposition of the migrant ban I would myself have been strongly opposed to an address by president Trump in Westminster Hall.

Mr Bercow was applauded by MPs on the opposition benches when he said parliament must stand up against racism and sexism.

He said: “We value our relationship with the United States. If a state visit takes place, that is way beyond and above the pay grade of the speaker.

“However, as far as this place is concerned, I feel very strongly that our opposition to racism and to sexism and our support for equality before the law and an independent judiciary are hugely important considerations in the House of Commons.”

Mr Bercow also outlined his opposition to Mr Trump being invited to address MPs and peers in the royal gallery, a room in parliament often used for state receptions.

He said such an invitation would normally be issued in the names of the Commons and Lords speakers, adding: “I would not wish to issue an invitation to president Trump to speak in the royal gallery.”

Labour leader Jeremy Corbyn backed the Speaker, tweeting: “Well said John Bercow. We must stand up for our country’s values. Trump’s state visit should not go ahead.”

He said: “This is the right decision by the speaker. The prime minister might wish to kowtow to the nasty misogynist that now sits in the Oval Office but no-one else does. We do not want him to speak to us. He is not welcome.”