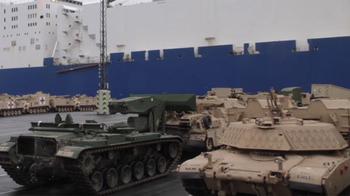 US military hardware, including M1A2 Abrams battle tanks and Bradley infantry fighting vehicles, have arrived in the northern Estonian town of Tapa as part of continued US efforts to counter the alleged Russian threat.

More than 50 units of US military equipment, including four battle tanks and 15 infantry fighting vehicles, were delivered to Tapa, the Estonian Defense Forces said in a statement. The personnel of the Charlie Company of 68th Armored Regiment’s 1st Battalion from the US Army 4th Infantry Division arrived in the town two days earlier, on January 30.

The company commander, Captain Edward Bachar, said that the US troops would take part in the Estonian Independence Day parade. Earlier, Bachar also said that his company would begin its expert marksmanship training this week.

“The movement of equipment and troops into and around Europe marks the beginning of a continuous rotation of armored brigade combat teams from the United States as part of Operation Atlantic Resolve,” the US Defense Department said in a statement, commenting on the move.

“Atlantic Resolve is a demonstration of continued US commitment to collective security through a series of actions designed to reassure NATO allies and partners of America’s dedication to enduring peace and stability in the region in light of the Russian intervention in Ukraine,” it added.

The deployment marks a new phase of the Operation Atlantic Resolve, which began in April 2014, following the Crimean referendum to split from coup-stricken Ukraine and join Russia. Atlantic Resolve is perceived by Washington as a demonstration of continued US commitment to the collective security of Europe in the view of alleged Russian “assertiveness.”

In January, 2,800 pieces of US military hardware, including US Abrams tanks, Paladin artillery, Bradley fighting vehicles and 4,000 troops arrived in Europe as part of the operation. These forces subsequently moved to Poland to participate in military drills in late January, and then were deployed across seven countries, including the Baltic States, Bulgaria, Romania and Germany. A headquarters unit is stationed in Germany.

In July 2016, NATO members agreed to the “biggest reinforcement since the Cold War,” posting four multinational battalions to Estonia, Latvia, Lithuania and Poland.

In addition to American troops going to Poland, NATO members Germany, Canada and Britain are also contributing to the significant NATO forces buildup in Eastern Europe and are sending battalions of up to 1,000 troops each to Estonia, Latvia and Lithuania.

Apart from the military buildup on Russian borders, the US and NATO strategy also includes conducting continuous, enhanced multinational training and security cooperation activities with US and NATO partners in eastern Europe. Since the Operation began, these military exercises have been conducted in Estonia, Latvia, Lithuania, Poland, Romania, Bulgaria and Hungary.

In mid-January, Estonia and Lithuania also signed agreements with the US regulating the status and deployment framework of American soldiers and hardware on the territory of the two Baltics states, which were dubbed “first of its kind.”

The agreements provided a legal framework for the presence of US military personnel and their family members in the two Baltic States, as well as the use of the local military sites by American troops. They also enable a range of joint “defense-related activities.”

While NATO members continue to point toward perceived “Russian aggression,” calling it “a source of instability,” Russia has consistently denied that it poses any kind of threat. Moscow has also expanded its own military training and increased its strategic capabilities in areas such as Kaliningrad, its western exclave.

Russia also tried to ease tensions by proposing enhanced cooperation with NATO on multiple levels in August. The proposal covered such fields as combatting terrorism and “cooperation to avoid incidents at sea and in the air” in border areas with NATO countries.