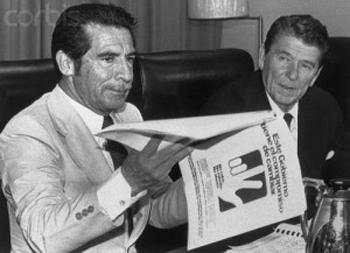 Instead of building a “Great Wall” on the Mexican border, President Trump might find it so much cheaper, so much easier, so much more humane, so much more popular — if the U.S. government would just stop overthrowing or destabilizing governments south of the border.

And the United States certainly has a moral obligation to do this because so many of the immigrants are escaping a situation in their homeland made hopeless by American intervention and policy. The particularly severe increase in Honduran migration to the U.S. in recent years is a direct result of the June 28, 2009 military coup that overthrew the democratically-elected president, Manuel Zelaya, after he did things like raising the minimum wage, giving subsidies to small farmers, and instituting free education. The coup – like so many others in Latin America – was led by a graduate of Washington’s infamous School of the Americas.

As per the standard Western Hemisphere script, the Honduran coup was followed by the abusive policies of the new regime, loyally supported by the United States. The State Department was virtually alone in the Western Hemisphere in not unequivocally condemning the Honduran coup. Indeed, the Obama administration refused to even call it a coup, which, under American law, would tie Washington’s hands as to the amount of support it could give the coup government.

This denial of reality continued to exist even though a U.S. embassy cable released by Wikileaks in 2010 declared: “There is no doubt that the military, Supreme Court and National Congress conspired on June 28 [2009] in what constituted an illegal and unconstitutional coup against the Executive Branch.” Washington’s support of the far-right Honduran government has continued ever since.

In addition to Honduras, Washington overthrew progressive governments which were sincerely committed to fighting poverty in Guatemala and Nicaragua; while in El Salvador the U.S. played a major role in suppressing a movement striving to install such a government. And in Mexico, over the years the U.S. has been providing training, arms, and surveillance technology to Mexico’s police and armed forces to better their ability to suppress their own people’s aspirations, as in Chiapas in 1994, and this has added to the influx of the oppressed to the United States, irony notwithstanding.

Moreover, Washington’s North American Free Trade Agreement (NAFTA) has brought a flood of cheap, subsidized U.S. agricultural products into Mexico, ravaging campesino communities and driving many Mexican farmers off the land when they couldn’t compete with the giant from the north. The subsequent Central American Free Trade Agreement (CAFTA) brought the same joys to the people of that area.

These “free trade” agreements – as they do all over the world – also resulted in government enterprises being privatized, the regulation of corporations being reduced, and cuts to the social budget. Add to this the displacement of communities by foreign mining projects and the drastic U.S.-led militarization of the War on Drugs with accompanying violence and you have the perfect storm of suffering followed by the attempt to escape from suffering.

It’s not that all these people prefer to live in the United States. They’d much rather remain with their families and friends, be able to speak their native language at all times, and avoid the hardships imposed on them by American police and other right-wingers.

President Trump, if one can read him correctly – not always an easy task – insists that he’s opposed to the hallmark of American foreign policy: regime change. If he would keep his Yankee hands off political and social change in Mexico and Central America and donate as compensation a good part of the billions to be spent on his Great Wall to those societies, there could be a remarkable reduction in the never-ending line of desperate people clawing their way northward.