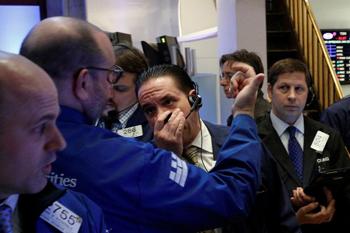 Conflicting signs from the White House have left brokerage firms and lobbyists unsure whether a controversial rule governing retirement advice will ever be put in place, but they are taking no chances and complying anyway.

But that call for a review was significantly weaker than an earlier draft, seen by Reuters, that requested a 180-day delay in the scheduled April 10 effective date of the rule, which is already on the books.

Trump’s memo did not go as far as White House early guidance to reporters that the memo would ask the department to “defer implementation” of the rule.

It is not clear to Washington insiders just how quickly or easily the Labor Department can delay implementation of the rule.

And while most expect there will eventually be a delay, it still is not clear to Wall Streeters who have already started changing their business models whether they can count on a deferral or reversal of the regulation.

“There’s confusion because it injected a whole lot more noise into the system with very little specificity about what is to come,” said Michael Spellacy, the head of PWC’s wealth management consultancy, who said he spent most of his weekend on the phone with the heads of 35 U.S. brokerages they are advising discussing the memo and its implications.

Legal experts say the Labor Department likely will have to undertake a formal rulemaking process in order to delay the rule’s implementation – a process that cannot happen overnight, and that may be further delayed by the lack of a permanent Labor Secretary.

Trump’s choice to be Labor Secretary, Andrew Puzder, has seen his own confirmation indefinitely postponed in the Senate amidst delays with his ethics paperwork.

One other possible wrinkle that could impact the rule’s implementation, meanwhile, is a pending legal challenge in a federal court in Texas.

Last week, the judge said she plans to rule no later than Feb. 10.

The fiduciary rule is separate from the banking rules that were put in place after the 2008 financial crisis. Trump has also ordered a review of the 2010 Dodd-Frank reform.

EXPECTING A DELAY, BUT COMPLYING ANYWAY

In the meantime, lawyers are advising their financial services clients to continue preparing for the upcoming deadline.

“What is clear from the memo is that we don’t have certainty yet,” said Michael Kreps, an attorney with the Groom Law Group.

The White House did not explain why it scaled back its memo, but legal experts say it was most likely changed because the prior version may have violated the Administrative Procedures Act – a federal law that governs the rulemaking process.

That law requires public notice and a comment period before changes to a rule can be made.

Had Trump proceeded with the original plan for a 180-day delay, the change could have been vulnerable to legal challenges.

It can issue what is known as an “interim final rule,” which would immediately delay the effective date while seeking comments from the public on why a delay is justified.

Or, it can issue a proposed rulemaking to delay the rule’s compliance deadline, give the public 30 days to comment, and then issue a final rule.

A Labor Department spokeswoman reiterated on Monday that the department is reviewing its legal options to delay the rule, but declined to elaborate.

Kenneth Laverriere, an attorney at Shearman & Sterling, said he fully expects the rule to be delayed eventually, though it will come after companies have already spent a lot of money to comply.

Of those, Bank of America intends to adopt the most aggressive changes with its plans to scrap selling brokerage IRA accounts starting in April.

“The genie is certainly out of the bottle,” Laverriere said.