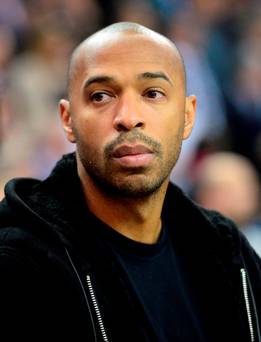 Thierry Henry believes Arsene Wenger should sign a new contract to continue as Arsenal manager – but has suggested his former boss needs to fix a mental block in his squad if he is to bring the glory days back to the club.

Wenger’s contract expires at the end of this season and after back-to-back defeats against Watford and Chelsea ended Arsenal’s hopes of ending their 13-year wait for a Premier League title, calls for Wenger to quit have been growing among Arsenal fans.

Yet Arsenal’s all-time record scorer Henry believes Wenger is the right man to steer the club next season, even though he believes the problems affecting the team are as much mental as they are physical.

“Personally, I do not think Arsene has to go, but he has some problems to solve,” Henry told RMC.

“The work he has to do at the moment is difficult, because it is mental work. What I saw against Chelsea (3-1 defeat on Saturday) is a mental problem.

“I don’t want to go into details but that is why Arsene’s job is very complicated because it is a mental problem. And it’s not easy to manage.

“Every time Arsenal can put pressure on the leaders or put the pressure on others by being first, usually in that match, they lose and then you lose confidence and bad results follow. The problem is more mental than quality.”

Henry went on to question whether the current Arsenal squad had what it takes to sustain a challenge for the Premier League title, as he suggested re-enforcements would be required.

“I think there is quality in this team, but is there enough to win the championship,” he asked.

“Is there enough quality to win the title and if you look on paper, we can debate that, but, on paper, there is enough.

“At the beginning of the season, when you look at Chelsea and Arsenal on paper, there is not a huge difference. So that means it’s possible. If Chelsea is ahead, Arsenal too can do it.

“I think Arsenal players are not aware of what they can achieve. At some point you have to believe in your chances of winning.

“It takes self-management and self-discipline in the group. Sometimes you lose momentum and then you wake up and it is the end of the season.”