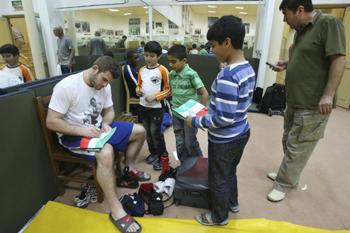 FEBRUARY 7, 2017  ISTANBUL, TURKEY—Among the first casualties of President Trump’s immigration ban was the United States wrestling team – victims of a reciprocal Iranian ban that would have kept Americans out of the Freestyle World Cup in Iran in mid-February.

Then Mr. Trump’s ban was suspended by court order. Iran responded by rescinding its ban. The American wrestlers could travel.

Not so lucky were two Iranian archers planning to take part in a stage of the indoor Archery World Cup in Las Vegas this weekend. Their US visas were never issued. Also unlucky were the 45 scholars with American passports meant to attend a convention of the Association for the Study of Persianate Societies in Shiraz next month. No Iran visas; convention canceled.

Sports and academic or cultural exchanges have been a barometer of relations between the US and Iran since the 1979 Islamic revolution toppled the pro-West Shah. They have ebbed – under the 2005-13 tenure of archconservative President Mahmoud Ahmadinejad – and flowed, when his predecessor, reformist Mohammad Khatami, reached out to Washington as part of a “dialogue of civilizations.”

Tentative openings began once again after the 2015 nuclear deal was reached. Iran’s President Hassan Rouhani made the case that Iran needed to ease its isolation and had no reason to fear engaging the US and the West.

But that argument may be losing ground. The latest tit-for-tat is emblematic of a much deeper uncertainty in Tehran, as the US travel ban adds to suspicions of a leader who has decried the nuclear deal as “disastrous” and whose aides have in the past spoken of regime change. The White House also put Iran “on notice” after a Jan. 29 missile launch and an incident by Iran-backed rebels against a Saudi Arabian warship off the coast of Yemen, which has been interpreted by many in Tehran as the start of a new anti-Iran binge in Washington.

The effect, analysts say, may be the opposite of what’s intended: spurring average Iranians to rally around a ruling system whose hard lines they often chafe against.

“If Trump intended to damage Iran, he missed it, as the nation now is gathering behind the nezam [governing system] and supporting it,” says an Iranian official in Tehran who asked not to be named.

“As long as [US] policies target the nezam, people would say that it is the system which wants to be the black sheep and does not abide by international norms,” says the official. “But now it is different…. Trump is putting back in place the small parts of that wall of distrust that were [pulled down] by the nuclear deal.”

For Iranian hard-liners, the renewed belligerence from the White House is proof of their longstanding narrative that the US is irreversibly anti-Iranian, can’t be trusted, and is therefore a perennial threat, analysts say. That’s a reversal from the Obama administration, which along with five other world powers invested heavily in diplomacy with Iran to reach a deal. It will also reassure hard-line factions that chances are dimming for US-Iran ties to normalize any time soon.

As athletes on both sides, thousands of students, and tens of thousands of legal Iranian green card holders tried to navigate the immigration ban, which is still temporarily suspended, Iran’s supreme leader Ayatollah Ali Khamenei spoke about Trump’s presidency for the first time.

“We are thankful to this gentleman [Trump] who’s come along! He’s made our job a lot easier – he’s shown the true face of America,” Mr. Khamenei told Iranian Air Force officers on Tuesday.

“No enemy can paralyze the Iranian nation. [Trump] says ‘you should be afraid of me.’ No!” said Khamenei. He predicted a larger than normal turnout at mass rallies across Iran on Feb. 10, when Iranians mark the 38th anniversary of its revolution.

Soon after Khamenei spoke, a hashtag went viral created by his supporters in Farsi, which read: #ThankYouTrump.

Since the fall of 2015, Khamenei has warned repeatedly against “infiltrators,” and accused the West and especially the US of waging a cultural “soft war” against the Islamic Republic – even as a handful of visas were approved for American students, and US-Iran academic ties were beginning to again take root.

“It is a fact that the deal created a tiny window for more and more people contacts,” notes the official. “More tourist visas were issued. More students applied for student visas, and higher education officials encouraged the students.”

Sports at the forefront

That began to revive a tradition in which sports have been the spearhead, especially with exchanges between American and Iranian wrestlers. The first visits in the late 1990s to Iran saw the spectacle of the US flag – which is still burned by hardliners chanting “Death to America” at pro-regime rallies – hanging solemnly in Iran. State television would turn away from enthusiastic Iranian fans chanting “USA! USA!” or when the Star Spangled Banner was played in the arena.

One key sporting moment was when Iran beat the US in the 1998 soccer World Cup. Then-President Bill Clinton, echoing Mr. Khatami, said he hoped the game “can be another step toward ending the estrangement between our two nations.”

“They are ice-breakers,” says Mohammad Ali Shabani, an analyst and London-based editor of Al-Monitor’s IranPulse.

“Before and after the [1998] game, it wasn’t ‘Haha, I beat you.’ They gave them flowers,” says Mr. Shabani. “Those kinds of things fly in the face of those who claim all Iranians are inherently hostile towards the United States.”

Student numbers also tell a story about the impact of exchanges, and the desire of Iranians to study in the US. More than 51,000 Iranian students were in the US on the eve of the revolution in 1979, for example, but that number dwindled to just 1,660 in 1998, according to the Institute of International Education (IIE), which tabulates annual numbers by country.

Last year 12,269 Iranian students were studying in the US, and contributed an estimated $386 million to the US economy, according to IIE, citing US Department of Commerce data. Nearly 80 percent of the Iranians are graduate students, and make up the bulk of the 17,000 foreign students from the seven nations reportedly affected by the ban.

The number of Iranian students has grown annually by 10 percent to nearly 33 percent in the past decade. By contrast, barely a handful of Americans study in Iran, and one Farsi-language student last year was detained for 40 days in Evin prison, charged with trying to overthrow the regime, before being released as part of a US-Iran prisoner exchange that included Washington Post reporter Jason Rezaian.

The majority of Iranian students in the US often end up staying, joining the legions of Iranian-born doctors, lawyers, and professionals who live and work in the country.

That’s made the hard-liners’ case more difficult. “They benefit forces in favor of engagement by creating an atmosphere in which interaction is normalized,” says Shabani of Al-Monitor.

Rouhani and Foreign Minister Mohammad Javad Zarif “aren’t seen as idiots or losers in this game. They made use of active diplomacy to show the world, and most of all the Iranian people, that the issue is not the Islamic Republic,” he says, about the nuclear talks. “They reached out to the right [US] government at the right time.”

After the US travel ban was announced, Mr. Zarif announced the Iranian counter-ban, and tweeted: “#MuslimBan will be recorded in history as a great gift to extremists.”

But in some ways, it may free up the chances of closer diplomacy, especially with Europe.

“I think Trump’s noise may bizarrely reduce sensitivity about outreach among some hardliners, since they now probably think chances of success are far lower,” says Shabani.