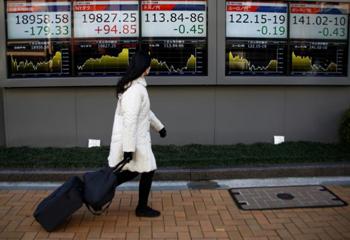 Asian share markets hovered below four-month highs on Wednesday and the euro was pressured as doubts over the policies of U.S. President Donald Trump and a looming election in France sapped investors’ confidence.

European shares were expected to open mixed, with spread-betters looking to a 0.3 percent fall in Britain’s FTSE .FTSE, an almost flat opening in Germany’s DAX .GDAXI and 0.1 percent rise in France’s CAC .FCHI.

MSCI’s broadest index of Asia-Pacific shares outside Japan .MIAPJ0000PUS was up 0.1 percent in late trade, after spending most of the session in the negative territory.

“The markets are now paying attention to political risks in Europe and the United States, after a rally earlier this week following the strong U.S. payrolls data,” said Kenta Tadaide, senior economist at Mizuho Research Institute.

With more than half of the S&P 500 having reported results, fourth-quarter earnings are on track to have climbed 8.2 percent, which would be the best performance since the third quarter of 2014, according to Thomson Reuters I/B/E/S.

A raft of strong global economic data and hopes that Trump would quickly deliver on talk of stimulus measures had helped to support world share markets, and the dollar, since late last year.

But the lack of detail on Trump’s spending plans and some other policy stances taken after he was sworn in on Jan. 20 have unsettled investors.

Trump’s protectionist leanings on international trade and controversy over his move to temporarily ban the entry of immigrants from seven Muslim-majority countries have caused alarm.

“Corporate earnings have been pretty good so far. But without details of Trump’s economic policies, it is hard to become bullish,” said Masahiro Ichikawa, senior strategist at Sumitomo Mitsui Asset Management.

The dollar has been steadily declining against the yen since Trump signaled displeasure with Japan’s currency stance on Jan. 31.

The pair may see limited moves for now as traders look to a meeting between Trump and Japanese Prime Minister Shinzo Abe on Friday for clues on how he will treat America’s major trading partners.

The single currency has been hit by growing concerns that the far right could win France’s presidential vote and take the country out of the euro and European Union.

The gap between French and German 10-year borrowing costs FR10YT=RR DE10YT=RR widened to 78 basis points, the biggest level since late 2012.

Support for conservative challenger Francois Fillon, who was seen as a frontrunner a few weeks ago, has tumbled in the wake of a financial scandal, losing ground to independent centrist Emmanuel Macron and the anti-EU National Front leader Marine Le Pen.

While most investors expect Le Pen to be defeated in the run-off by a more moderate candidate, markets are nervous after last year’s experience of the Brexit referendum and Trump’s victory. The election will take place in two rounds on April 23 and May 7,

In addition, wrangling over Greece’s bailout are starting to haunt the market ahead of the euro group meeting on Feb. 20, with two-year Greek debt GR2YT=RR yield soaring to near 10 percent on Tuesday, compared to around six percent just about two weeks ago.

Still, the market impact was limited as the fall in the reserves, of $12.3 billion to $2.998 trillion, was the smallest in seven months, indicating China’s renewed crackdown on outflows appears to be working, at least for now.

“The fall was relatively small and had limited impact on the mainland markets. It is not like we have seen massive capital outflows,” said Naoki Tashiro, head of TS China Research.

International Brent crude futures LCOc1 fell 0.4 percent to $54.81 per barrel. They were down 3.5 percent so far this week.