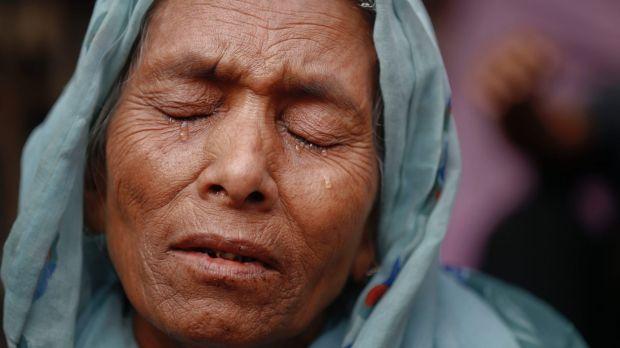 Lindsay Murdoch
Bangkok: A soldier slits a baby’s throat for crying out for his mother’s milk.

Soldiers stomp on the stomach of a mother while she is in labour and then burn down her family home.

Where is the outrage?

For months Rohingya Muslim families who fled Rakhine to squalid camps at the Bangladesh border had been telling stories so shocking they seemed far-fetched in the country where just over 12 months ago voters rushed into the streets after historic elections to celebrate an end to half a century of repressive military rule.

As the reports filtered out from Rakhine, the new government repeatedly denied any human rights abuses were taking place while the military conducted what it called “cleansing operations,” after attacks on police posts last October.

But the 43-page UN report headlined “devastating cruelty” provided the first official confirmation that Myanmar authorities were using violence and terror against Rohingya, which the UN concluded raised serious concern that “ethnic cleansing” was underway to force almost one million Rohingya from Myanmar, the country formerly known as Burma.

Here were meticulously recorded interviews with 204 victims and witnesses who reported seeing murders (65 per cent) people being seen to be taken away by security forces and never seen again (56 per cent) , see rapes (43 per cent) sexual violence (31 per cent) and destruction of property and looting (40 per cent).

But inside Myanmar the findings have been suppressed by state-run media and largely buried in most other media outlets.

The government promised to investigate and referred the report to an already established investigation commission headed by a former general which is widely expected to be a whitewash.

Nobody knows what Aung San Suu Kyi, the country’s State Counsellor and de facto leader thinks of the report because she rarely gives interviews to journalists, and has not held a proper press conference since before taking office.

It has become clear, though, that the Nobel Peace laureate doesn’t control the troops and the generals are determined to hang on to much of their power through control of key security ministries.

The military has also intensified attacks on Kachin and other minorities in northern Shan State, as Myanmar’s future hangs in the balance.

The strongest response to the UN report was from the United States, whose State Department spokeswoman described the findings as “deeply troubling”.

Australia’s diplomatic and political clout in the region and $42 million of taxpayer’s money sent to Myanmar each year for aid projects, including some in Rakhine, gives Canberra significant leverage with the country.

But Australia’s response to the findings was typically the same as it has been for years when other human rights abuses have emerged in neighbourhood countries, which was to avoid “megaphone diplomacy”, a code for falling over backwards not to give offence.

When I wrote the news story on the UN report a reader sent me a message saying how she had been worrying about the cost of her son’s wedding, the little things like flowers and place cards.

But she said after reading about the abuses she realised “how selfish we have all become and narrow minded in how we view the rest of the world”.

“I am so ashamed that I thought the world should take care of itself. You have opened my eyes to sorrow beyond belief,” she wrote.

As US President Donald Trump implements an “America first” policy, the US is expected to be much weaker on human rights issues in other countries than was the previous Obama administration.

Australia should now cast aside its reluctance to speak up openly and honestly when serious human rights abuses occur in the region.

It should push for the establishment of an independent tribunal supported by the International Criminal Court to hold Myanmar’s military to account for some of the most serious state-sanctioned violence committed against innocent families in Asia since Indonesian proxy-militia and soldiers rampaged through East Timor in 1999.