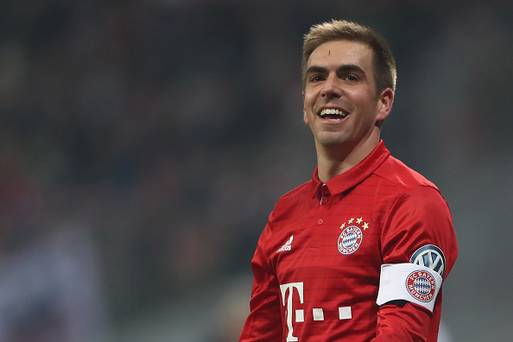 Bayern Munich captain Philipp Lahm does not believe he will be able to maintain his high standards next year after announcing he will retire from football at the end of the season.

The 33-year-old has a year left on his contract with the defending Bundesliga champions but will walk away early – also saying he has rejected an offer from the club to become a sporting director.

He admits he has been considering his future for some time and will give his all for the rest of the campaign.

“I’m going to stop playing football at the end of the season,” the FC Bayern youth product confirmed on the club’s official website following his team’s 1-0 victory over VfL Wolfsburg in Tuesday evening’s DFB Cup Round of 16 tie.

“More than a year ago I started checking and questioning myself from day to day and week to week. I’m certain I’ll maintain peak form through to the end of the season. I can manage that until the end of the campaign, but not beyond it.”

On the chance to join the club’s backroom staff, he added: “There were talks, and in the end I decided it’s not the right time for me to take up a new position at FC Bayern.”

Lahm announced the news after Bayern’s 1-0 win over Wolfsburg in the DFB-Pokal, having made his 500th Bayern appearance against Schalke on Saturday.

A World Cup winner with Germany, Lahm is aiming to win a record eighth Bundesliga title this season.

The Munich-born player has spent his entire club career with Bayern, bar a two-year loan spell at Stuttgart between 2003 and 2005.

He has won seven Bundesliga titles, six DFB-Pokals, the Champions League and the Club World Cup with Bayern.

He captained Germany to World Cup glory in 2014 before announcing his retirement from international football.