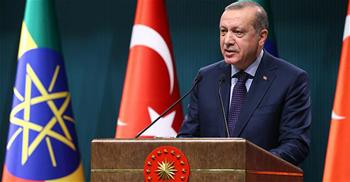 Turkish President Recep Tayyip Erdoğan has said his office will make its final decision this week regarding charter amendments that were sent to him for approval after being passed by parliament on Jan. 21.

If the president approves the amendments as expected, the articles will be submitted to a public referendum some time in April.

“I guess, we will make our decision this week and a step will be taken with this decision,” said Erdoğan in a press meeting held after a meeting with Ethiopian President Mulatu Teshome Wirtu.

Erdoğan also recalled that he had given his consent to the amendments in a speech during a visit to the southern province of Mersin last week, adding that he was now waiting for the right timing.