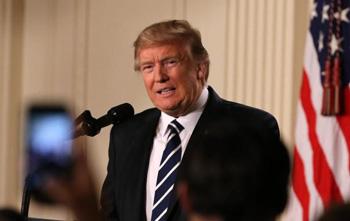 by David Voreacos and Erik Larson

It was, by any measure, high legal drama: For just over an hour, appeals court judges sharply questioned the lawyer defending President Donald Trump’s ban on travel from seven predominantly Muslim countries.

Less than three weeks after Trump took the reins of a divided nation, a hearing that in other circumstances might have been dry legal back and forth was a media event, played out by disembodied voices on a conference call that was streamed live. More than 130,000 tuned in via YouTube alone.

The issue at hand Tuesday was whether a freeze won by two states could continue to block Trump’s executive order, issued without warning on Jan. 27 and said by the president to be vital to national security. But there was a quick escalation from that narrow matter into constitutional and procedural questions about the power of a president to exclude people he considers threats.

The grilling of both sides was rapid-fire, with August Flentje, representing the Department of Justice, facing harsher questioning than his adversary. He appeared flustered at times, saying at one point, “I’m not sure I’m convincing the court.”

Noah Purcell, the Washington solicitor general representing the states of Washington and Minnesota, also came under the gun, challenged about evidence that the ban discriminates on the basis of religion. Judge Richard Clifton said he was “not entirely persuaded,” noting the order affected only a small share of the world’s Muslims.

A decision by the three-judge panel of the U.S. Court of Appeals for the Ninth Circuit in San Francisco may come this week. The jurists gave no clear sense of how they would rule. They could leave in place a temporary restraining order issued Feb. 3 by a federal judge in Seattle that put Trump’s restrictions on hold, lift it or retain some of it.

Whatever the ruling, it is almost certain to be appealed to the U.S. Supreme Court.

There are three key issues: whether the states have a legal right to attack the administration’s immigration orders, whether the ban discriminates against Muslims and whether the people of Washington and Minnesota have been harmed directly. The three judges fired off questions on those and more, citing case law, frequently interrupting the lawyers, sometimes sounding impatient.

“The judges were better prepared,” said Bruce Rogow, a constitutional law professor at Nova Southeastern University in Fort Lauderdale, Florida, who has argued 11 times before the U.S. Supreme Court. “I think the court was eager to have great arguments. I think the court left the case concluding they were going to have to do it themselves.”

They posed dozens of questions on Trump’s authority to issue the order, and on the government’s contention that states have no right to sue over the matter. They also pressed Flentje for evidence the seven countries covered by the ban are particular sources for potential terrorism.

Purcell said Trump’s statements as a candidate provided a treasure trove of evidence supporting claims the ban was intended to discriminate against Muslims. “It’s remarkable to have this much evidence of intent,” he said. In rebuttal, Flentje said it was extraordinary for a court to second-guess a president’s national security decision based on newspaper articles.

Clifton seemed the most supportive of the administration — though he called the U.S. argument about the terrorism risk “pretty abstract” — and Judge Michelle Friedland most supportive of the states, at one point helping Purcell point to evidence in the record of intent of religious discrimination. Judge William Canby was harder to read, putting most of his questions to Flentje.

During the arguments, streamed live by the court, the judges were in Phoenix, Honolulu and San Jose, California, and the lawyers dialed in from their offices. The hearing was the top topic under “trending” on YouTube. People listened on CNN, the New York Times website and other platforms.

Washington and Minnesota contend Trump’s order is unconstitutional and hurts their residents and businesses, and that the president “unleashed chaos” by signing it. Taking their side in friend-of-the-court briefs are more than 120 companies including Apple Inc., Facebook Inc. and Microsoft Corp.

U.S. District Judge James Robart’s temporary restraining order halted the ban while the case is being litigated. Whatever the appeals court decides, Robart is moving ahead with the states’ request for a long-term injunction, beginning with written arguments next week.

The Trump administration contention is that the Robart decision threatens national security and second-guesses the president, who has wide authority to dictate who is allowed into the U.S. The judge also exceeded his authority by extending his ruling to include the entire country, according to Justice Department lawyers. Robart said voiding the president’s order nationwide was needed for consistency.

Other federal courts, including one in Brooklyn, have issued narrower rulings striking down certain parts of the ban. A federal judge in Boston last week upheld it, adding to confusion about whether it remained in place as tens of thousands awaited definitive word.

As the hearing wore on Tuesday, the DOJ’s Flentje appeared to hint at a compromise by suggesting the court could limit the scope of the restraining order so that it wouldn’t apply to people with visas or green cards who had already been in the U.S. but were traveling abroad.

“That shows an acknowledgment that they think they may lose, while trying to salvage parts of the executive order,” said Geoffrey Hoffman, director of the University of Houston Law Center Immigration Clinic, who predicted a victory for the states. “I think the fundamental argument of the president and the federal government is that there is no judicial review. As the panel recognized, that is not the law.”

Laura Foote Reiff, a business immigration lawyer in Washington, said that “my gut is the Ninth Circuit will uphold” the temporary hold on the ban. But that doesn’t mean the states will ultimately succeed in blocking Trump’s order. Once “the case is heard on the merits, I think it’s a toss up.”