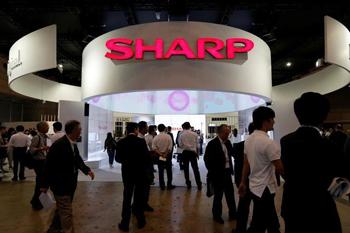 Japanese display maker Sharp Corp may start building a $7 billion plant in the United States in the first half of 2017, taking the lead on a project initially outlined by its Taiwanese parent Foxconn, a person with knowledge of the plan said.

A decision by Foxconn to give Sharp the lead would come as Japanese Prime Minister Shinzo Abe prepares to travel to the United States to meet U.S. President Donald Trump, who in his inauguration speech vowed to put “America first”.

In a package Tokyo hopes will please Trump, Abe will unveil investments to create as many as 700,000 U.S. jobs, people familiar with the matter told Reuters earlier.

“The investment will be by a Japanese consortium that will also include manufacturing equipment makers,” said the person, who was not authorized to speak with media and so declined to be identified.

A spokesman for Sharp said no decision on building a plant had been made. Foxconn, formally Hon Hai Precision Industry Co Ltd, did not immediately respond to a request for comment.

Terry Gou, the chief executive of Foxconn, the world’s largest contract electronics maker, last month said he was considering investing around $7 billion to build a display-making plant in the United States, but did not elaborate on any time frame.

Gou said Foxconn, which operates plants in China that make most of Apple Inc’s iPhones, had been considering the plan for years. He said the issue came up when business partner Masayoshi Son, head of Japan’s SoftBank Group Corp, talked to Gou before a December meeting Son had with Trump.

Trump has raised concerns in Japan by criticizing the scarcity of U.S. cars in its auto market. He has also accused the Tokyo government of using monetary policy to devalue its currency and has also lumped Japan with China and Mexico as big contributors to the U.S. trade deficit.

Abe will visit Trump at his private Mar-a-Lago resort in Florida over the weekend, where the two leaders will play golf, following a meeting on Friday in Washington.

That would follow a meeting Abe had last week with the head of Toyota Motor Corp, as the government compiled a plan to ward off U.S. criticism of Japanese trade policy before the summit. Abe also said Japan may increase energy imports from the United States.