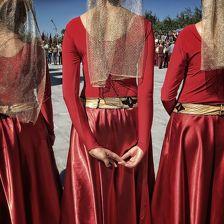 John Stanmeyer crouched under a rock on the border between Armenia and Turkey to avoid a rainstorm in April 2015. From his vantage point, he could make out the remains of a decaying, centuries-old bridge that once linked the two countries. “I was deeply saddened on a more profound level then I’ve ever been” he said. “I looked at the bridge that used to link two beautiful people and I thought that there had to be something more to do.” His ambitions were large: nothing less than fostering understanding, ending mistrust and “building peace between two beautiful nations,” he said. But from decades of photographing, he knew that there was “too much madness, indifference and pain” for a single images rarely to bring about significant change. His goals were well beyond what he could accomplish alone.

Instead, Mr. Stanmeyer recruited Anush Babajanyan, an Armenian photographer, and together they created Bridging Stories, a program that trains young Turks and Armenians to photograph their daily life with cellphones and share them on an Instagram in order to further understanding between their people. They enlisted Serra Akcan, a Turkish photographer, to help implement the project.

“We are neighboring countries, but because of our history we don’t know much about each other,” said Ms. Babajanyan, a founder of 4 Plus, an Armenian women’s photo collective. “What we learned in history classes and through government propaganda can affect our attitudes towards our neighbors without us knowing one individual from the other country.”

Bridging Stories recruited two dozen Armenians and Turks between 18 to 23 years old and brought them together in Dilijan, Armenia, for a weeklong training session and discussions. By photographing what they saw in their hometowns and sharing on social media they realized they had much in common, Ms. Akcan said. In time, some of the young participants also realized they had their own prejudices, she aid.

“When we’re talking about the long-lasting aftermath of a conflict, these kind of projects are very important because they connect us to what is most human,” Ms. Babajanyan said. “This comes from within ourselves, not from above or from any government, and that’s the truest, purest way to change.”

Their photographs from the past five months are being exhibited in Yerevan, the Armenian capital. To emphasize the similarities between the countries, the captions are covered so you see the images first, before lifting a lid to read where they were taken. A similar exhibit was to be held in Istanbul this month but was canceled because of security concerns after the assassination of the Russian ambassador. Instead, a book of photos will be published in Armenian, Turkish and English later in the year. The project was funded by the United States Embassy in Yerevan.

Ms. Babajanyan and Ms. Akcan have participated in collaborative projects between Armenian and Turkish professional photographers before. Mr. Stanmeyer, a founding member of the photo collectiveVII, had worked on a similar program with Israeli and Palestinian youth. They are planning to expand Bridging Stories and make it more than a one-time event, Mr. Stanmeyer said, in order to reach a larger audience and have real effect. He said that “Monumental change” has to come from the people of Turkey and Armenia. “Who else to tell the story of human indifference and human weakness, than those who are affected by it?”