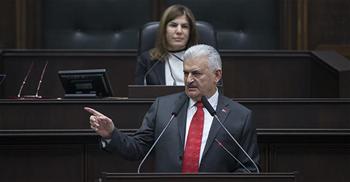 The main opposition Republican People’s Party (CHP) is siding with terrorism because it is opposing constitutional amendments that will vastly increase President Recep Tayyip Erdoğan’s powers, Prime Minister Binali Yıldırım has said.
“Who is saying ‘no’ to these [constitutional] changes? The PKK [outlawed Kurdistan Workers’ Party] and FETÖ [Fethullahist Terror Organization]. They are terrorists and of course we say ‘yes’ to what they say ‘no.’ Who else is making a campaign for ‘no?’ The HDP [Peoples’ Democratic Party] and the CHP. It seems that the CHP has boarded the same boat as the HDP, which takes its strength from the terror organization,” Yıldırım said in an address to his parliamentary group on Feb. 7.

Yıldırım and his Justice and Development Party (AKP) are about to launch a campaign for the referendum in which the constitutional amendments are expected to go to a vote in April. While the leadership of the Nationalist Movement Party (MHP) supports the move, two other opposition parties, the CHP and HDP, are dead set against the changes.

Yıldırım criticized the CHP for not supporting the move and for standing with “marginal groups” like the HDP, FETÖ and the PKK.

“The CHP prefers to give the same picture as marginal groups,” Yıldırım said. “We listed the HDP, FETÖ and PKK as the reason why we are saying ‘yes’ to these changes. But the answer came from the CHP. You can’t win the hearts of the people by allying with these groups.”

The CHP must realize this state of affairs and use the referendum as an opportunity to reverse this, the prime minister said.

Not life or death matter

Urging the public opinion not to fall into the trap of those who want to make provocations ahead of the upcoming referendum, Yıldırım said the polls were not a matter of life or death and that people should not give credence to those trying to exploit sensitive fault lines in society.

“Don’t allow those who would try to take this poll out of its context and create tension in society. We will campaign with all possible democratic political means for the referendum,” he said.

After Yıldırım’s harsh words for those planning to vote “no” in the upcoming referendum, President Recep Tayyip Erdoğan took a similar stance.

“This step is taken against those who are shoulder to shoulder with those who are in Kandil,” Erdoğan said in a Feb. 7 speech, referring to the Kandil Mountains, known as the outlawed Kurdistan Workers’ Party’s (PKK) headquarters in northern Iraq.

“We have taken this road to say ‘yes’ to this presidential system in order to oppose those who stand against our flag. I believe that my nation will confirm this journey by saying ‘yes,’” he added.