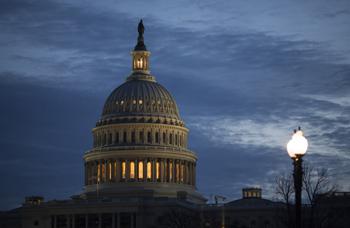 Does the failure of the ‘El Niño’ of protest over Betsy DeVos’s nomination mean senators don’t care what constituents think? Hardly.

FEBRUARY 7, 2017  WASHINGTON—Thousands of Alaskans have contacted their Republican senator, Lisa Murkowski, with concerns about Betsy DeVos as President Trump’s Education secretary. They called. They emailed. They saw her in person.

Mrs. DeVos, they argued, didn’t have enough public education experience, and her emphasis on school choice could threaten the state’s isolated rural schools. More than 80 percent of Alaska’s communities are not attached by a road. They have no school choice.

Senator Murkowski heard her constituents. On Tuesday, she voted against DeVos’s confirmation. But only one other Republican joined her, despite Democrats’ all-night marathon of floor speeches urging more GOP defections.

In the end, Vice President Mike Pence was forced to come to the Senate to break a 50-to-50 tie. It was an historic first for a cabinet confirmation.

The failure to stop DeVos – despite hundreds of thousands of calls and emails to senators and protests at their home offices – might lead citizens to believe that voicing their concerns is ineffective. Indeed, polling shows that only about 1 in 10 Americans think that members of Congress care about what constituents think.

The opposite is true.

“One of the myths is that the public believes their voice doesn’t make a difference. But in survey after survey [of members of Congress], constituents are central to legislators’ decisionmaking,” says Bradford Fitch, president of the nonpartisan Congressional Management Foundation, which helps connect constituents and lawmakers.

Effective advocacy, however, depends on a whole host of variables, he and others say – from the issue itself, to the way in which a lawmaker is contacted, to whether a lawmaker is undecided or not.

An ‘El Niño’ of protest

Mr. Fitch says the flood of calls over DeVos’s nomination is an “El Niño,” the sort of super storm of protest that slams Capitol Hill only every four or five years.

He recalls the 2009 tea party protests at legislators’ town halls over the Affordable Care Act, and the 2006 citizen push-back over immigration reform. The protests killed reform that year, and the GOP promise to repeal – and later replace – Obamacare helped Republicans gain control of Congress and the White House.

Since his inauguration, Mr. Trump has faced a wall of resistance from his opponents, and Fitch wonders if this intensity is going to be the “new normal.”

It’s a combination of organized and organic activism, with advocacy groups emailing supporters or posting on Facebook instructions on how to reach members of Congress – in person, through calls, and electronically.

The instructions pass along tips like including your ZIP code and also scripts and talking points for people who might be nervous about calling Washington.

Hill staffers have been inundated. Sen. Bob Casey (D) of Pennsylvania was contacted more than 100,000 times by Pennsylvanians opposed to DeVos, more than he’s received for any nomination in his 10 years in the Senate.

Constituents are encountering busy signals and full voicemail boxes. Julia Silge, a Utah resident who strongly opposes DeVos and for weeks had been unable to connect with her GOP senator, Orrin Hatch, ordered a pizza to be delivered to his Salt Lake City office. The pizza came with a message to vote “no” on Devos. She added a $10 tip to ensure delivery.

It was a creative idea. But don’t try it. The pizza was refused delivery because nobody in the office had ordered it. The office reported it to police and Ms. Silge later got a call from security at the building about a “suspicious pizza.”

We listen, but we need you to be specific

Silge’s ham-and-pineapple pizza may have failed to reach her senator’s office, but it followed what advocacy experts say is a must: It made a specific request. It asked a senator to do something for which he or she can later be held accountable.

On the other hand, general messages, such as ones to “support women” during the post-inauguration women’s march, are hard to pin a senator down on. Fitch says, “A senator’s going to say, ‘Yeah, I support women.’ ”

Blanket opposition to all things Trump – for instance, to his cabinet – doesn’t resonate much with Sen. John Boozman (R) of Arkansas. People who voted for him are happy that the president is acting on his promises, while many of Trump’s opponents want the senator to vote against all of his cabinet choices.

“It’s not so much, ‘We’re opposed to this or that cabinet secretary; we’re opposed to all of the president’s choices,’ which for me, is a red flag that that’s not very thoughtful,” said the senator in an interview in his office on Monday.

Like Murkowski’s, his office has also been flooded with calls since Inauguration Day. “It’s been crazy,” a staffer tells touring visitors, even as the phones ring on two desks in the front office. Calls coming in from residents in other states are being forwarded to the appropriate senator.

“We work really hard to represent everybody. And if somebody’s calling from Arkansas and they’ve got concerns, then we’re going to listen to them and we’re going to take notes. I really do look at this stuff.”  But, he continues, blanket opposition to everything “kind of marginalizes you” as a constituent.

Fitch suggests that when Congress moves from nominees to issues – such as immigration – advocates might have a better chance of success, particularly if they hit on one or more of the three “H”s: head, heart, and political health.

While phone calls will be tabulated as “for” or “against,” emails, letters, and social media can tell stories that pull emotional strings, he explains. Indeed, senators often read from constituent letters on the floor. And in-person encounters can make a tremendous difference, as the tea party learned from town halls.

But the division of America into starkly red and blue states may weaken constituent ability to influence Congress, points out Jeremy Mayer, a political science professor at George Mason University in Arlington, Va.

“Calls measure intensity of constituent opinion and they matter even today,” he says. “But they matter a lot less than they used to and that’s because of polarization.”

Red-state senators will care more about fending off a primary challenger than pleasing voters who will never support them anyway, he explains.

But Fitch sees advocacy and citizen participation – on both sides – as alive and well. Those who wanted to shake things up made their voice heard in November, and now opponents are doing the same.

“At the center of all of this is Donald Trump,” says Fitch. “He certainly has gotten people engaged.”