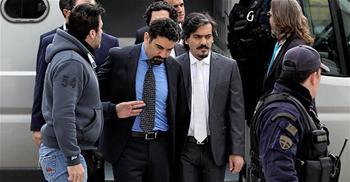 Eight fugitive Turkish soldiers who fled to Greece after the July 15, 2016 coup attempt initially thought about fleeing to Russia or Ukraine but later settled on Greece, Istanbul prosecutors said on Feb. 7 after hearing four other soldiers’ witness testimonies.

Preparing a new deportation demand file to be sent to Greece to re-demand the extradition of the soldiers who have been there since the foiled coup attempt, prosecutors included the testimonies of the four soldiers who were initially part of the plan but later stepped back.

According to their testimonies, they, a group of 12, boarded on a Skorsky S70 after the coup attempt failed, and flew from a military base in Istanbul to Istanbul’s Riva district. The witnesses said that after having a series of phone conversations, the eight soldiers began to make plans to leave the country, which they decided not to follow.

The soldiers said they were blamed of failing to carry out the coup by the eight soldiers carrying. The fugitive soldiers reportedly first thought about flying to Russia but were unsure because of then-strained Russia-Turkey relations. They later thought about Ukraine but gave up on that option as well because of political turmoil in the country.

They said the eight later decided on Greece and left them in Riva.

The suspects are charged of “attempting to carry out a military coup,” “attempting to assassinate the president,” “robbery,” and “inflicting damage on public property.”

The file added that the charges inflicted on the suspects were not political or military, quoting the European Convention on Human Rights, which says that attempting to murder a state leader or his family is not considered a political crime.

Greece’s Supreme Court on Jan. 26 rejected Turkey’s extradition request, citing that the eight men would not get fair trial in Turkey and that their lives would be at risk if they returned. The decision triggered anger from Turkey. The asylum application processes of the soldiers are ongoing.

Meanwhile, Turkish prosecutors have recently issued warrants for 102 suspected members of the Gülenist network, of whom at least 35 of them were detained in operations carried out in 30 provinces. Some of the suspects are believed to be high-ranking members of the network.